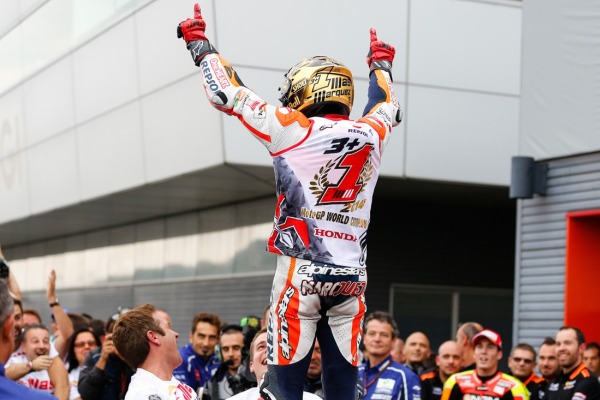 Jorge Lorenzo won his second consecutive race in Motegi, but the main story of the day was 21-year-old Marc Marquez retained his MotoGP World Championship to become the first Honda rider to do so at the home of Japan.

Lorenzo rode the perfect race at the front, taking the lead from Valentino Rossi early on, and controlled the distance to second place with relative ease, making no mistakes as he looks to be back to his former self and seems to be starting his 2015 season preparations already. He won the race by 1.683s ahead of the now double MotoGP World Champion Marc Marquez, with Valentino Rossi third.

“It’s unbelievable! It has been a very difficult year but Yamaha has been improving the bike little by little and we’re getting better every race,” said the Spaniard after the race.

“In Aragón, because of the ‘flag to flag’ we were able to win. We were lucky under the circumstances and I also improved in the race compared to the practice. Here we expected to get more and more strong for the race and be able to fight for the win but we didn’t expect to lead by this much and have a gap of 2.7 seconds in the middle of the race. I’m very happy to win the race for the second time in a row.

“We are happy for Marc that he won the title. This year he was the best in general, so we want to say congratulations. The good thing about this year was that the four top riders were very similar. We had very strong races that were consistent and equal, so for the next races I expect a lot of fights. We are very close to the second position and that’s our goal. We are going to try.”

All eyes were on Marquez, and after making a less than perfect start from the second row, he quickly recovered over taking Pol Espargaro by the third corner, and set about over taking his team-mate. He caught and passed Pedrosa and Andrea Iannone in the laps shortly after, and started to hunt down the front three. He then passed off pole man Andrea Dovizioso and set about passing Valentino Rossi, which was enough for him to win the title.

After a few rought moves, he managed to get past, and stay ahead of the Doctor on the ninth lap, and managed to pull away, maintaining a comfortable gap ensuring he would give Honda their first premier class title win at Motegi. Valentino Rossi held onto third position, staying ahead of Dani Pedrosa, who will’ve been disappointed not to make more of his front row start. Dovizioso rounded out the top five in another weekend of progression for Ducati.

Iannone rode to a lonely sixth place, whilst the top ten was rounded out by Stefan Bradl , Pol Espargaro, Bradley Smith and Alvaro Bautista.