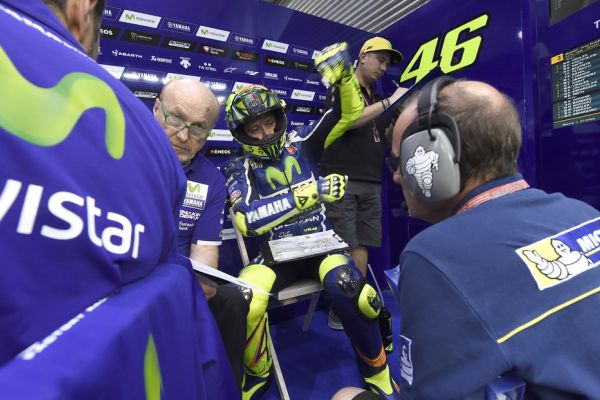 Valentino Rossi got his pursuit for a tenth World Championship off to a fantastic start as he finished the first evening of testing at the Losail International Circuit second fastest overall.

The Italian is bidding to overcome the immense disappointment befallen on him after the 2015 season is looking to bounce back, and after the first 45-minute session of 2016, he looks ready to launch another title bid.

Rossi, who has said he will decide his future after the first few races of 2016, appears to be adapting to the new standard ECU and Michelin tyres as he worked methodically through the opening day. His best lap was a 1:55.707, which was just over a quarter of a second shy of the best lap of the day posted by his team-mate Jorge Lorenzo.

Once again, Rossi was more focused on longer runs and looking for the optimal setting for Sunday’s race, before posting his best time as the session was coming to a close.

“The first practice was positive. I’m quite satisfied, it was a strong way to start the season, because the second position is good and also the lap times are already not so bad,” said the Doctor.

“They’re in the 1’55s and the pace is quite good. We start working from what we did in the test. This means that we did a good job during pre-season and we begin with a good base, but now we have to keep focus. The condition of the track changes a lot session by session and together with the team we have to deliver good work so we will be ready when the grip becomes better. I’ll try to improve the feeling and also try to make the right decision for the tyres.”

Behind Rossi was Andrea Iannone, Rossi’s compatriot was just under three-hundredths of a second behind his best time. The Ducati Desmosedici GP16 has enjoyed a largely under the radar pre-season in the hands of Andrea’s Iannone and Dovizioso, but with Ducati usually going well in Qatar, Rossi is fully aware of the threat they possess.

“We have some data and it looks like the problem for everybody at this track is Ducati. The GP16 has 10-12km more on the straight,” he explained.

“It’s a problem, if they are able to stay behind then on the straight they can overtake and win the race.

“At the same time, it looks like the Honda is a little bit closer to us and the Suzuki has improved.”

If Suzuki are to pull a shock result, it would likely come through Maverick Viñales, something Rossi is refusing to rule out. The 2015 Rookie of the Season has demonstrated jaw dropping speed in the pre-season. Suzuki have improved with a lot of new pieces, including a new engine and seamless shift gearbox, all of which allowed the 21-year-old to end Thursday’s session fifth fastest, just over a tenth and a half behind Rossi.

“Maverick’s riding very well, he has very good lines and uses his MotoGP bike in a very good way. I think he will be one of the riders that can win in MotoGP,” said Rossi, who started his Grand Prix career when Viñales was just one.

“He is a great talent and he is too young. Also the Suzuki bike has improved. So yes, I think that Maverick can stay with us in the race.”