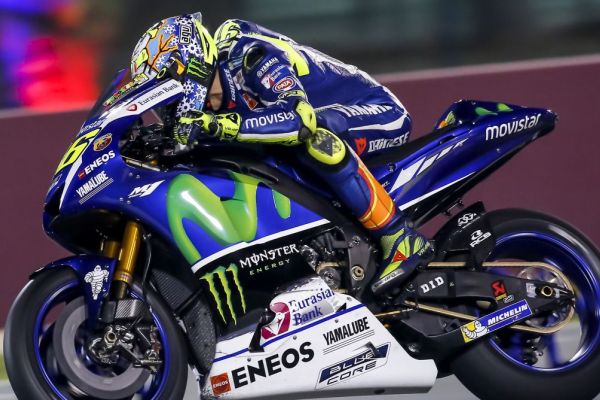 Valentino Rossi’s preparations for the 2016 season continued in an encouraging fashion as he ended the first day of the final MotoGP pre-season test in Qatar third fastest overall.

Rossi, much like many of the other full-time MotoGP riders waited until the sunlight had gone and floodlights had taken over at the Losail International Circuit before going out on track.

Unfortunately for the Doctor a small crash on his first lap out of the pits meant his session was delayed in getting properly underway. However the Italian did manage 34 laps before the session was cut short an hour early due to the dew falling, causing hazardous track conditions.

Rossi’s time of a 1:55.894 was third fastest overall, and despite being 0.442 seconds slower than his team-mate, it was just 0.014 off of the time set by second place man Maverick Vinales.

Despite the small spill, Rossi quickly put the crash behind him and got to work.

“I started in a bad way, because after ten corners I crashed,” said the nine-times World Champion.

“I wasn’t very fast, but maybe because I had too much angle the rear slid, but fortunately it was just a small slide at 70 km/h. It wasn’t a big problem but to start like this wasn’t fantastic…

“After the problem we jumped on the other bike and I’m quite satisfied about today because, also here in Qatar, it looks like our bike is competitive. We can be strong and fast and this is the most important thing, because it’s already the third track where the Yamaha is competitive.

“We also started with a good base set-up, in fact I didn’t work a lot on it. I felt good from the first moment and rode quite fast and I was able to consistently improve my lap times and in the end I’m in the third position, so it was a good day.”

Despite his encouraging start to not only this test, but his the previous two tests in Malaysia and Australia too, Rossi knows he has his work cut out if he to get the better of his team-mate.

“Today Jorge was very fast, he was faster, but like in Phillip Island me, Viñales and Jorge are the stronger riders,” he said.

“In Phillip Island there was also Marquez, here it looks like he was a bit slower than us today. I’m happy to stay with the frontrunners and already lap in 1’55s, a little bit faster compared to the test last year, so it’s a good result.”

Many feared that the Yamaha may struggle in 2016 with all the focus last season being on the current year and not pushing development toward this season’s bike. Despite those fears, Rossi has said that the bike which he is learning toward using with the season less than three weeks away, is very similar to the 2015 M1.

“After the first two tests we decided to go with the bike that’s more similar to last year,” said the 36-year-old. “Now we have two race bikes ready in the garage, so we’re already in race-mode.”