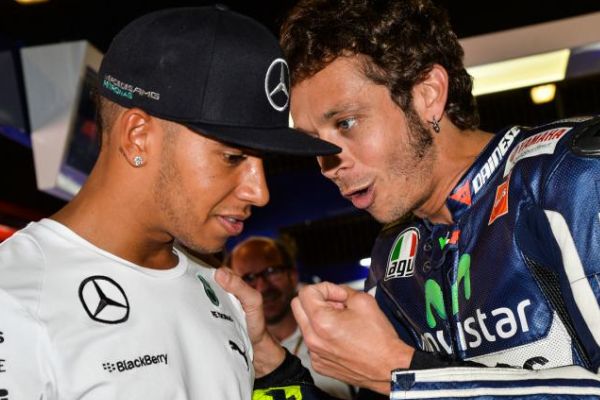 Reigning Formula One triple World Champion Lewis Hamilton has once again confessed his love for MotoGP, whilst criticising the current state of Formula One.

Hamilton who is a self confessed fan of two-wheeled racing was speaking about the state of affairs Formula One is in. He spoke, dismissing the idea of having the new ‘halo cockpits’ on Formula One cars and suggest his sport is broken and lacking direction.

“MotoGP is just so cool, much more exciting to watch, I would say, just because it’s closer racing,” the 31-year-old Brit told autosport.com.

Hamilton, who has a deal to have a custom motorcycle sold and made by MV Augusta, spoke last year about his desire to try a MotoGP machine in some capacity, and he admitted he is still desperate to get on the back of a MotoGP machine, even if it is as a pillion passenger – although he wouldn’t tell his team.

“I really need to try a MotoGP bike. I’m dying to at least get on the back of one. That would be so cool. I just won’t tell my team that I’m doing it!”

As well as wanting to try his hand at riding a MotoGP machine, he also said that he wants to get to more races in 2016, as he hasn’t managed more than one race a season.

“I definitely want to make it to more races this year – I’ve only been to one in a season, and I want to get to some more.”

Hamilton isn’t the first Formula One driver to show an interest for wanting to have a run out on two-wheels. Double World Champion Fernando Alonso impressed during a Honda RC213V test at the Honda fans day in Motegi in December.