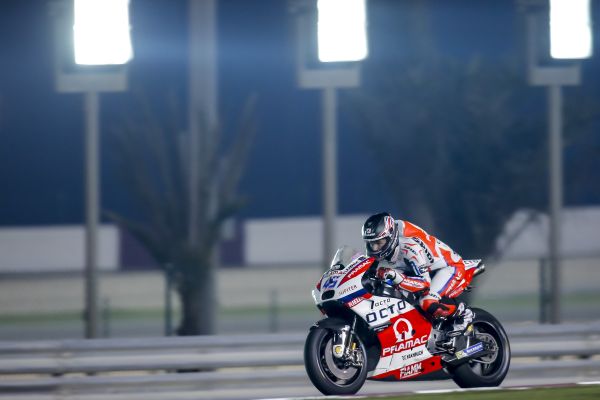 Pramac Ducati’s Scott Redding continued his thoroughly impressive start to his Ducati career with a strong first day of testing, during the final MotoGP pre-season test of 2016 in Qatar.

The British rider, who joined the Pramac team after two seasons in MotoGP on Honda’s, and his move to the Italian company looks an inspired one so far.

Redding ended the first night of testing in Qatar as the fifth fastest man overall. His best time of the evening, 1:56.213, was 0.761 off of the best time of the evening, posted by Movistar Yamaha’s Jorge Lorenzo. Despite being just over three-quarters of a second off of Lorenzo’s time, the Spaniard’s time was so good, Redding was only just over three tenths off of Maverick Viñales’ second place time.

Redding wasn’t working on new parts this evening, instead focusing instead of continuing to adapt and find an optimum setting for his Ducati Desmosedici GP and opting for longer runs than short one lap focus.

Looking for comfort on his Desmosedici, Redding found that he was lapping almost as quickly on his second bike, as he was on his main bike.

“It’s been a good day although the track conditions were not the best. We did not do too many laps but are satisfied with our work today. In the end I tried the second bike and the laptime that came out it was almost the same compared to bike one,” explained Redding, who completed 46 laps on the first night.

“Last season Ducati had a great race here so I’m very confident. Today we have been shown to have potential and this potential can grow.”

Moving into the second day of the test, Redding is hoping that he will be able to build on his strong opening day, and remain at the sharp end of the timing sheets.

“Goals for tomorrow? I wish I could improve my lap time and stay in the Top 6 which is the goal of the season.”

One thought on “Redding continues impressive adaption on Ducati”