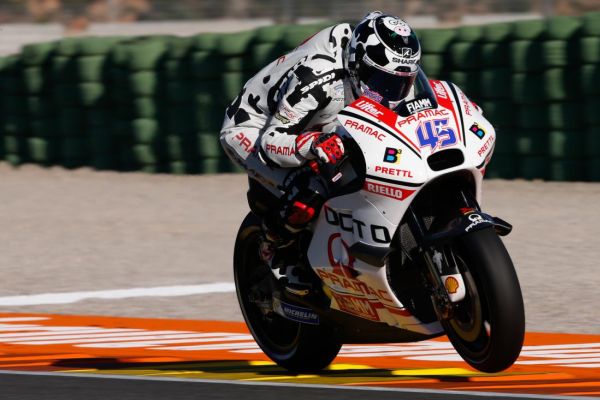 Scott Redding’s life as a Ducati rider got off to an encouraging start during the first day of MotoGP testing in Valencia.

The Brit moves over to Ducati after two seasons on Honda machinery since making the move into MotoGP two seasons ago, with the hope of kick-starting his MotoGP career with a new manufacturer.

Ducati have been long term admirers of the 22-year-old, with Redding even testing at Mugello back in 2012 for them. Ducati clearly trust Redding and the Brit was entrusted with being the only Ducati man from the Factory or Pramac squad to run both the new Michelin tyres and Magneti Marelli, Dorna spec electronics package. His GP15 was equipped with the now winglets too, the first time a Pramac bike has featured them.

Even with this, Redding managed to end the day in eleventh place with a best lap time of 1.32.214 which was 0.7 second quicker than the best lap he managed during Sunday’s race on the Honda, a bike he’d been riding all season.

“The team is great, already I feel very welcome and with the bike, I’m happy,” said the Brit who was debuting a cow helmet and leathers to signify ‘moo-ving on’.

“In my first laps I was already at a similar level to before. It was a good step, I already find it easy to ride and find the lines. Even with the Michelin tyres I felt OK, we had a small crash in the afternoon because we pushed a lot with the soft tyre but tomorrow we have some space to improve.

“There’s more power but you can use it, early on the gas; on the straights the bike is more level and not making a big wheelie and for me this was a big advantage, not to fight all the time with the bike, you can find a line where you want to go. That for me is nice to have in your pocket.”

Redding mentioned his small crash, it was a strange day of testing with ten crashes, all of which with the new front tyre from Michelin. Redding said there’s still tyres and combinations he wants to try tomorrow, but was impressed on the whole with the new tyres.

“I feel quite good on the Michelins. The rear is OK, I tried the hard but it wasn’t great at this circuit and with the front I only tried the soft, which was a bit too soft but tomorrow we’ll try the hard. I couldn’t get the temperature in to the harder rear, the front tyre isn’t bad but you have to change your riding style as you can’t attack the corners as hard as you could on the Bridgestone,” he said.

“A couple of times today the front started to close on me when I loaded too much, same speed, same angle and brake release, but just half a metre later on the gas and then I overload it. You couldn’t do that with the Bridgestone but you can on the soft Michelin.

“The software didn’t feel too bad. I felt okay straight away. They said the anti-wheelie wasn’t too good but I felt okay with it. For me it was good to start with next year’s software. We thought it was a better idea to start with the new electronics rather than giving me something better than I might have when it comes to next year.”

Despite ending the day ahead of Valentino Rossi and with the quickest lap time he’s managed during the four track days so far in Valencia, Redding thinks he can improve further, admitting his quickest lap contained some mistakes in it.

“We had more in our pocket, even when I made my fastest lap time we made quite a few mistakes as with the softer front tyre we couldn’t really turn the bike in, so I was surprised that the lap time was two tenths faster than I did in qualifying with the Honda and it came quite easy,” said the 22-year-old.

“I did the same time with used tyres and in the afternoon again I was faster and made the same time again, so pushed a bit more and that’s when I had the crash.

“The traction control works really well for coming out of corners, the tyres also help but you can also control it with your hand a lot more than you can on the Honda. Everything was easier, I could make laps, feel quite comfortable and look to improve.”

After a positive first day with the Bologna factory, Redding admitted that he feels like he has been “in the team a year already”.

“Overall the feeling is really good, I feel like I’ve been in the team a year already! The plan is to have a lot of support from Ducati. Whether it’s in Pramac or factory, Ducati want the bikes to be at the front and you feel that help and that helps me as a rider that they want to help me win,” said Redding.

It’s completely different to the bike I tested in 2012. The tyres, the bike, even in position is quite a lot different. That was the biggest thing for me to learn from the Honda too. The power is unbelievable. Everyone calls this bike a beast but it’s actually quite nice,” he added.

“The electronics are a step back from the factory stuff I’ve been using this year but it feels really good, I can’t complain. It suits my riding style so much. It’s a big change in the right direction, it’s not like I need this, this or this.

“The tank is feeling good, the position I’m in, in the straight I don’t have to move so much and that for me is the main thing, there are nearly four or five things that I can forget and that means we can focus on the bike, the entry and actually think about riding for once and not just making a lap.”