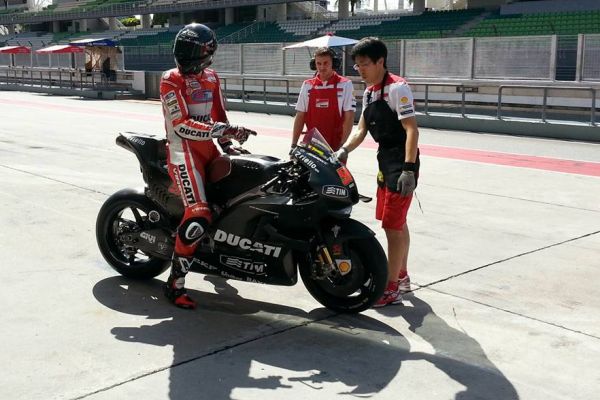 Ducati test rider Michele Pirro today gave the GP16 its first official run out during the first day of private testing at the Sepang International Circuit in Malaysia.

The Italian test rider, who got a handful of wildcard races for Ducati last season, was on hand in the sweltering tropical heat of Malaysia where he completed just over 50 laps aboard the brand new Desmosedici GP16, fully equipped with the new Michelin tyres and Magnetti Marelli software.

Ducati had delayed releasing the GP16, holding it back at the end of 2015 forcing their riders to begin the adjustment on Michelin tyres on the GP15. Despite running their old bikes, Ducati were extremely impressive in the tests at Valencia and Jerez, prompting many riders and teams to tip Ducati to cause an upset in 2016.

Michele Pirro gave the bike it’s first official run out today and he will get another day on the bike before Casey Stoner takes over for his first official test since returning to Ducati at the start of 2016. From Monday the first official MotoGP pre-season test of 2016 gets under at the same venue.

“Today we shook down the GP16 for around 50 laps in total,” Pirro told Italian website GPOne.com.

“It went quite well, we tested to see that everything was working properly and the first impressions were good. We’re happy, as nothing went wrong on the bike’s first time on track.”

With Pirro being entrusted at giving the new bike it’s first run out, he was asked what he thought his chances of putting in faster laps than the returning former World Champion…

“To go faster than Stoner will be tough,” he said with a laugh. “He is an incredible talent, but I need improve my own performance first and maybe then we will give him a hand. Let’s see his first impressions and then we’ll see.”