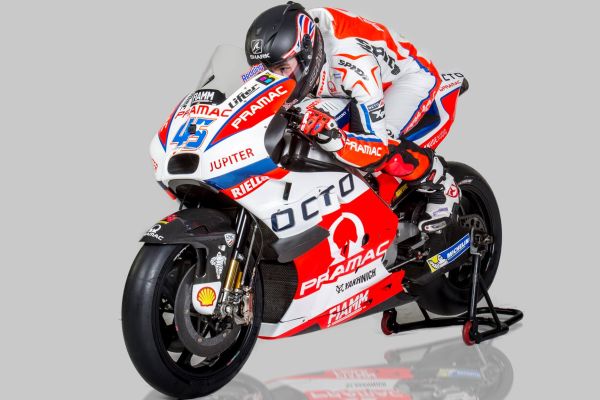 During tonights launch of the the 2016 Pramac Ducati, British rider Scott Redding said he is targeting a top six finish to the 2016 MotoGP season.

2016 marks a new start for Redding as he join Ducati after two years in MotoGP on different forms of Honda’s. After a tough 2015, Redding took his first MotoGP podium during a chaotic race in Misano, which saw him end up in the gravel during the early stages, but that was a rare highlight.

Despite having the factory RC213V under him, Redding finished the 2015 season in 13th position, one place lower than where he finished his rookie season on the underpowered customer Honda.

Redding enjoyed a strong start to his Ducati career with two impressive tests in Valencia and Jerez, where he even topped the timing sheets during the final day of testing in Jerez. The Pramac Ducati will be much closer to the full spec bike in which factory riders Andrea Dovizioso and Andrea Iannone will be riding.

Along with the near factory bikes and new tyres Michelin tyres and Magneti Marelli standard electronics the Pramac team are hoping to be much closer to the sharp end of the field than they have been in recent years.

Full of confidence from his start with the Boro Panigale factory, the Brit has said he doesn’t think he will be far away from the podium this season.

“Pramac is like a family. Everyone was so welcoming to me, it filled me with confidence and this is what gave me a good feeling from the beginning,” the Brit said this evening during the launch of his 2016 bike in Italy.

“You have to change your style quite a bit because it’s a different bike, tyres and electronics but I’m learning fast and the team are helping me a lot. I feel comfortable and ready to race.

“I think I can achieve top six in the championship and fight for some podiums. I believe with this bike I can show my 100% potential, which I couldn’t do the last two years. So if we can put it there, we’ll be fighting.”