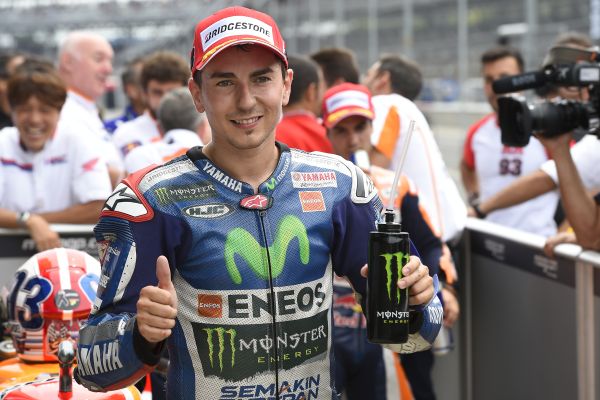 Reigning MotoGP World Champion Jorge Lorenzo has said that he hopes he can renew his contract with Yamaha into a tenth season and beyond during 2016.

Despite the occasional rumour of disillusion within the camp and Ducati’s multiple offers, Lorenzo has remained loyal to Yamaha and in turn they have helped him win three MotoGP World Championships in eight years, with a further three runner-up medals to his name during the same time period.

2015 looked set to be another difficult year initially for the eventual World Champion. A visor issue whilst leading in Qatar was followed by illness in Austin and a tyre issue in Argentina, all left Lorenzo already well behind his team-mate, who would lead the championship until the final round in Valencia.

With 2016 ahead of him, he was asked what he hopes he can achieve in 2016, to which he says he hopes he can win another world title, as well as confirm his stay with Yamaha.

“Hopefully we can repeat in 2016,” he told Spanish publication Sport. “I want to be healthy, to be champion again, and to renew with Yamaha.”

Despite the very obvious divide within the Yamaha garage with both Lorenzo and his team-mate battling for the World Championship until the last lap of 2015, the 28 year-old says that he has always been happy with his team.

“They have always treated me well and given me the best material. Even when I came to the class and Valentino was dominating the World Championship,” he said.

The World Champion has already began training for next season, but ensured he enjoyed his New Year celebrations. He made the short trip over to Palma de Mallorca with his girlfriend, Nuria Thomas, and his dachshund puppy, Tito, to be with his family, before jetting off to the Caribbean for a short break. “But it’ll be a short break, because we get busy very soon,” he says.

His first day back on duty for Yamaha will be 18th January when he will be in Barcelona presenting the 2016 Movistar Yamaha YZF-M1 along with his team-mate, before beginning the first pre-season test of 2016 two weeks later in Malaysia.

“They will be very important [the tests in Sepang], because next season we have new tyres with Michelin and there’s unique electronic control units for everyone,” said the three-time World Champion.

“So there is plenty of work ahead if we want to be fighting for victories again. But I’m sure we will adapt and get there.”