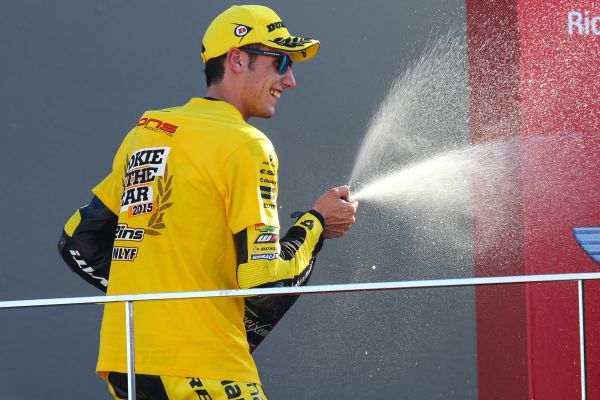 2015 Moto2 rookie of the year Alex Rins has stood by his decision to serve his time in the intermediate class of Grand Prix racing rather than jumping straight into MotoGP much like Moto3 rival Jack Miller did.

Throughout the 2014 season, both Miller and Rins were regularly battling at the head of the Moto3 field, Miller had signed a deal to head to MotoGP, Rins had (depending who you speak to) apparently turned down a deal to tread the same path, instead electing for two seasons with the Pons team in Moto2 instead.

Rins was supposedly subject to an approach from the Tech3 Yamaha team about making the, at the time, unprecedented leap from the smallest class to the premier class of motorcycle racing.

Miller signed a three year deal with HRC, and will next season find himself on a bike very similar to the one being ridden by factory duo Marc Marquez and Dani Pedrosa. Rins will be hoping to go one better than 2015 in Moto2, and secure his first World Championship.

Despite the relative success which Miller has had, Rins doesn’t regret his decision to wait and serve his apprenticeship in Moto2 before eventually moving into MotoGP.

“No [I don’t regret going straight to MotoGP] because at 18 I didn’t look ready to be fighting Marquez, Lorenzo and Rossi,” Rins said in an interview with El Espanol.

“If I go up to MotoGP I want to be fighting with the front guys. I preferred to take it easy and follow the natural course. I think what has done Miller is crazy!

“Moto2 is an excellent school to then make the jump to MotoGP.”

Although he has already turned down MotoGP once, it is still where the the 19-year old wants to be in the not too distant future.

“Of course I would like to [move to MotoGP in 2017], but depend on what you are prepared or not. I have a year left to think about it carefully.”

With two wins in 2015 and a further eight podiums in his debut season, Rins will be hoping that before he makes the step up to MotoGP, he can claim his first world title after being close but failing to clear the final hurdle on more than one occasion in Moto3. Despite only being behind Zarco in 2015, he knows the competition will be higher in 2016.

“I don’t think there is only one opponent,” he explained. “It’s difficult to draw conclusions because everyone comes afresh from Valencia.

“Lowes, Zarco, Lüthi, Marquez can all win a race… and many more people will be fighting for the title.”