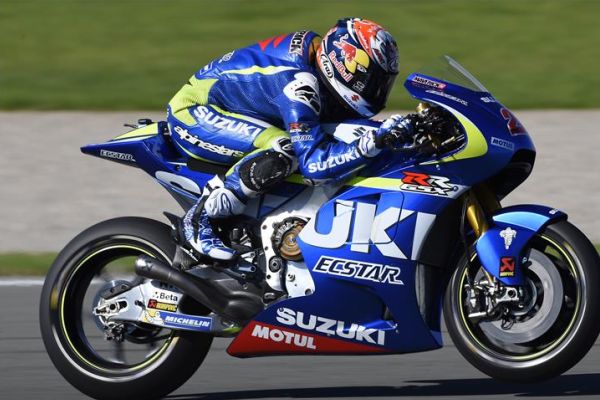 Maverick Viñales and Suzuki have completed their two day test at the Sepang International Circuit in Malaysia, where they tested the new seamless gearbox amongst other things.

The two-day test was the perfect opportunity to test the new seamless shift gearbox as they bid to close the gap to the top. The long straights and heavy breaking zones make the SIC a logical choice to test the latest additions to the 2016 GSX-RR.

During 2015 Suzuki were the only manufacturer to not use a seamless gearbox which allows riders to change gear without using the clutch lever to get through the box without losing drive.

“These two days have been very intense; we tested many many things and I’m happy because I could try the 2016 electronics,” said Viñales who didn’t use the new electronics during the Valencia test at the beginning of the month.

“The first touch was positive and it left me with the feeling that it has a great potential, but we still have so many things to work on and there’s room to improve. I’m also happy I could test the new seamless, we were expecting it and my impression is very positive. The track was not really clean which meant I couldn’t push really hard, but for our team the testing was good.

Despite not releasing any times from the test, Suzuki team-manager Davide Brivio was happy with the work of his young rider and with his test riders after the miles put in despite the absence of second factory rider Aleix Espargaro.

“These have been two very intense days but the outcome of the test is positive. We had few things to test, among which we managed to test the new seamless gearbox and I am happy that Maverick had a first positive impression,” he said.

“We also had the chance to compare some chassis parts and gathered important information for the winter development. We also started to work with the 2016 unified software – the test team already started with it in Valencia a couple of weeks ago – and we also gave it to Maverick.

“On this area we still have much work to do but the start was positive. For us this test has been very important to give the directions to work-on in the winter that we were called to do. We also tested new tyres for Michelin and found some good improvements to be worked on further in the future.

“In February we will be testing here again for the first IRTA test and we will try to finalise then even further improvements, especially in electronics.

“Unfortunately, Aleix could not join us so he will have a chance to test those items in February, hopefully after further improvements. We also had the support of our test riders Tsuda and Aoki who ran many laps to further investigate the new software and fine-tune the seamless gearbox.”