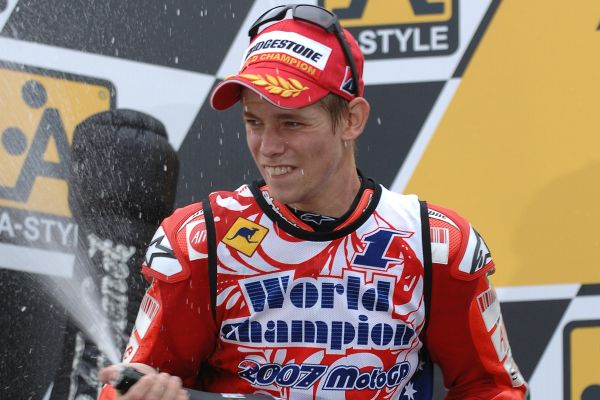 Ducati have confirmed that former two-time MotoGP World Champion Casey Stoner will return to the Italian factory as a brand ambassador and test rider in 2016.
The 30-year-old famously guided Ducati to their first MotoGP crown in 2007 on his way to winning 23 races for Ducati over a four year career. He remains the latest rider to win a MotoGP race on a Ducati in 2010 in Phillip Island.
Spending two years after he retired with Honda as a test rider and taking part in the eight-hours of Suzuka this year, Stoner has remained active on a bike. Honda announced earlier that Stoner would be leaving them at the end of 2016.
Stoner will take part in a select number of private tests for Ducati through 2016, helping develop the Desmosedici. He will also appear during World Ducati Week in Misano at the beginning of July as part of his role as a brand ambassador.
“It’s been a great journey with HRC over the last five years, winning the World Championship in 2011 was obviously a high point and I’ve made many friends and formed lasting relationships along the way,” said the Australian.
“For 2016 I am very excited to announce that I will again be joining the Ducati team. I have so many great memories working with the people and the brand of Ducati and the opportunity to work with them again is something very special.
“Gigi Dall’Igna has brought with him a new approach and I’m looking forward to assisting the team, Andrea Dovizioso and Andrea Iannone however I can. The Ducati brand and the Ducati fans have been such a big part of my career and my life, so it will be really great to reunite the relationship and start another chapter with this iconic brand.”
Ducati Motor Holding CEO Claudio Domenicali said that Stoner remained “in the hearts of all Ducatisti” and that he was “pleased that he has decided to come back to our family”.
“Stoner has always remained in the hearts of all the Ducatisti and I am really pleased that he has decided to come back to our family,” said Domenicali.
“Casey has an extraordinary talent and with his experience he will be able to make an important contribution for Gigi and the two Andreas in the development of the Desmosedici MotoGP bike.
“His presence at WDW 2016 will be a special gift for all the Ducati fans and enthusiasts, who will finally have the opportunity to catch up once again with this great champion who brought the 2007 world title to Borgo Panigale and who won numerous GP races with the Desmosedici GP.”
There was no word on whether Stoner would wild-card in any races as rumours back in Valencia suggested.
Photos via Ducati Corse