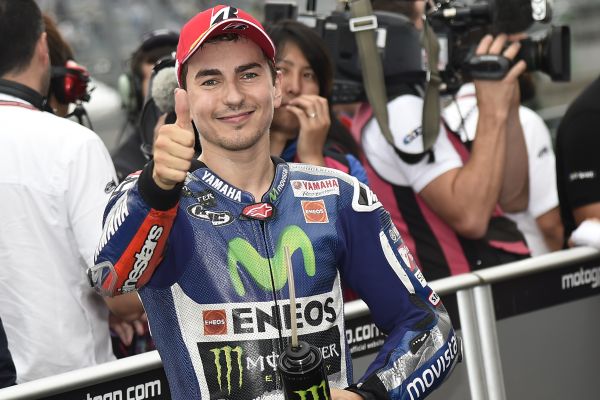 Despite losing ground on his team-mate and main title rival, Jorge Lorenzo insists he won’t concede in the battle for the 2015 MotoGP World Championship.

Lorenzo lost four points to Rossi in last weekends Japanese Grand Prix at Motegi. The substance behind the result, means that the title is now technically out of Lorenzo’s hands. Three wins will not be enough to win the World Championship if Rossi follows him home in second place at all three races.

With two of the final three circuits being tracks that Rossi has openly admitted are two of his favourites, and circuits in which he finished ahead of Lorenzo in last year, the Spaniard definitely has his work cut out if he is to claim his third MotoGP World Championship.

Despite the cards not being stacked in his favour, Lorenzo is defiant in declaring he will do everything he can to defeat Rossi.

“After another strange race I lost some value points in Motegi but I’m still in contention for the championship title. It’s true 18 points behind Valentino is a difficult margin to cut down but I will try with all my efforts,” he said.

“If I’m able to win all the races and Vale makes any mistake we can win the championship. Now we are facing another nice race. Phillip Island is a track I like a lot but also Vale enjoys it here so it will be interesting.

“It’s a very demanding track for the setting of the bike, also because of the tricky weather conditions, so we need to be prepared for anything.”
Photo via Movistar Yamaha