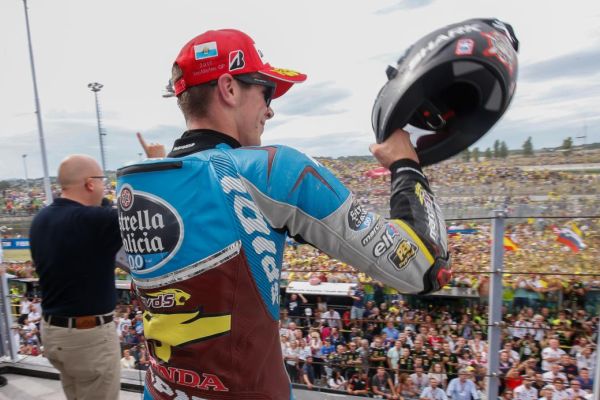 Scott Redding recovered from an early crash to claim his first ever MotoGP podium, with a third place in the indifferent conditions in Misano.

Two weeks after announcing he will be parting company with the Estrella Galicia 0,0 Marc VDS team at the end of the season, Redding delivered his best ride in a year and a half in the premier class of motorcycle racing.

Redding started the race well, gaining places quickly in the early, before a slow crash on the sixth lap left Redding in the dirt, and dropping through the field. With rain falling Redding came into switch bikes to a wet set up one, and it appeared to be the perfect time to do so.

However, with the track drying quickly, Redding once again timed his pitstop to perfection, this time going from wet to slick tyres, helping him cut through the field, and he leapt from 13th to fourth position with just seven laps remaining.

Redding then used his superious powered Honda RC213V to catch Forward Racing’s Loris Baz to pass the frenchman with just three laps remaining, before going on to score a memorable podium, joining fellow Brit Bradley Smith on the rostrum, the first time the feat has been achieved since Barry Sheene and Tom Herron shared the podium in Venezuela in 1979.

“Where do you start after a race like that? When it started to rain I knew I had nothing to lose and pushed hard on the slicks,” said Redding.

“But I pushed too much and couldn’t stop the bike before I entered the gravel and crashed. I thought that was race over but got back on as quickly as I could and I could see that a couple of guys still hadn’t passed me, so knew I was still in a good position. I changed to the rain tyres and had a really bad feeling. I couldn’t get them to working temperature and when I did the track had already started to dry.

“I switched back to slicks thinking I’d got no chance and then suddenly I saw P4. I thought it was a mistake but then saw seven seconds to Baz and got my head down to catch him in case it rained again. Then I’m in third and I certainly didn’t expect that when I woke up this morning. It’s a great feeling for me and especially the team because they have deserved this for sticking by me all season.

“I had nothing to lose so I was pushing so hard at the start, I locked the front and went straight, dropped it in the gravel and as fast as I could I tried to get the bike back on track. Then I thought I would come in for the rain, but the wet tyres weren’t working so I came in with nothing to lose. I was feeling good catching Baz, pushing and pushing and then I was there!”