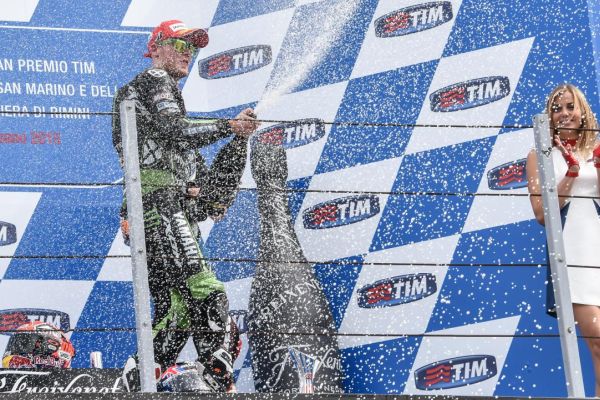 Bradley Smith claimed a career best second place finish during yesterday’s San Marino Grand Prix in Misano, after a gamble to stay on slick tyres, even after rain started to fall in the middle of the race.

Smith finished the race second to Marc Marquez, claiming his second ever MotoGP podium. With rain falling in the early stages of the race, all the riders decided to pit and swap bikes to a bike with wet tyres. Smith decided to stay out, and dropped as low as 21st, whilst tip-toeing around the fully wet track.

However, when the rain stopped falling, the warm ambient temperature the track began to dry quickly, playing into Smith’s hands. With the rest of the field now needing to pit again, Smith managed to slice through the field, on his original slicks, helping him claim his best ever result.

Whilst seeming brave, or even crazy, Smith admits that the decision was partially down to a mistake, rather than a pre-determined idea to not pit.

“I stayed out all race and didn’t pit once, which was definitely a crazy decision. I even admit that myself!” Smith said after the race.

“At the end of the day I missed the first lap entering the pits when Marc [Marquez], Vale [Valentino Rossi] and Jorge [Lorenzo] came in and the next lap it seemed to rain a little less, so I was two laps already behind so I thought ‘I’m in it for the long haul now’ and I decided to see if I can stay out on slicks. At the end of the day to be as low as P21 at one point in the race and to come and finish second is special.

Whilst ultimately proving the correct decision, Smith admitted that running around on a MotoGP bike on slick tyres in heavy rain, is quite scary.

“At some points it definitely got a little bit scary; I did 218 [kph] at one point and tried to high-side myself Turn 10 – the right kink at the end of the straight. Then the track started to dry and I knew that with these track conditions and the temperature we had all weekend the track would dry, but I didn’t know how fast this circuit would dry.”

He continued: “It was difficult to see exactly [where track was drying] and when you’re on slicks you can feel where the grip is and where it isn’t.”

Smith is now back ahead of Andrea Dovizioso in the MotoGP World Championship, holding a seven point lead on the Italian, and a 26 point lead over Dani Pedrosa, in what’s bound to be an exciting end to the season for the Brit.