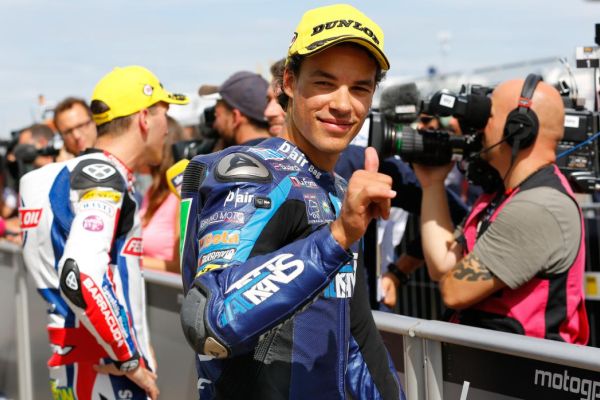 With Tito Rabat moving into MotoGP to replace the outgoing Scott Redding in the Marc VDS team, the Belgian team have acted quickly in signing Franco Morbidelli to replace the reigning Moto2 World Champion.

The Italian is currently sidelined with a broken tibia and fibula after a motocross accident, which saw him ruled out of this past weekends British Grand Prix at Silverstone, but next season he will be in the silver and red of Marc VDS, alongside current Moto3 World Champion Alex Marquez.

At just 21 years of age, Morbidelli, alongside Alex Rins has been the standout young rider in this seasons Moto2 class, making the move to the strongest team in the category a “no brainer”. He is currently eighth in the World Championship standings, and claimed his first Moto2 podium in Indianapolis, shortly before his accident.

With consecutive fourth place finishes, it appears Moto2 rookie Alex Marquez is starting to find his pace in the class, and with the addition of Morbidelli for next season, Marc VDS’s Moto2 team appear strong.

During the British Grand Prix at Silverstone, Marc VDS Team Principal Michael Bartholemy confirmed to speedweek.com, that Morbidelli was indeed joining his team next season.

“It is true, Morbidelli 2016 ride with us,” he told the German website. “But we will only make it official when he has recovered from his injuries.”

The Italian is a part of the VR46 riders academy, and has been getting guidance from Valentino Rossi through the season as part of the academy, helping him learn from the very best.

The Speedweek report also includes a suggestion that Scott Redding’s split with the Marc VDS team was down to title sponsor Estrella Galicia 0,0 wanting Spaniard Tito Rabat on the bike, and not the underperforming Brit. It also says that HRC are pushing for Jack Miller to be a second rider in the Marc VDS team, even though Marc van der Straten is struggling to finance a second bike, even with Lucio Cecchinello willing to give up his second bike.