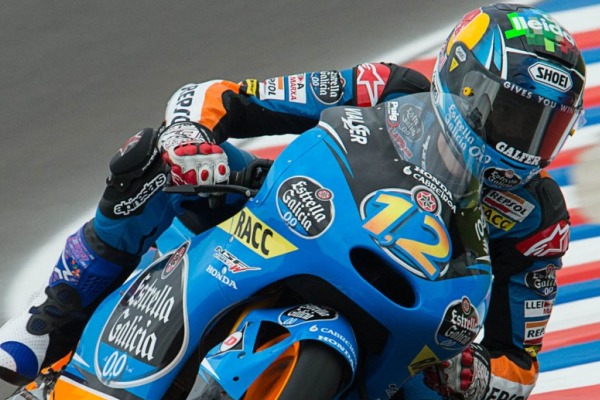 Alex Marquez has penned a two year deal with the Marc VDS team for 2015 and 2016 in the Moto2 class.

Marquez is currently 13 points behind Jack Miller in the hunt for the Moto3 title, and the 18 year old has been a revelation since coming into the Grand Prix paddock, with many drawing comparisons to Alex’s older brother, and current MotoGP World  Champion Marc.

Alex Marquez is thought to have chosen the Marc VDS team over any other offers due to their professional operation, and his very close relationship with Tito Rabat who has been confirmed with the Marc VDS team for next season at least.

“I am so proud and excited to announce I am joining Marc VDS Racing Team in Moto2 for the next two years,” said Marquez.

“It is very important for me because I am changing class with a fantastic team and a strong teammate. I have been working hard to be here and I want to thank the Marc VDS Racing Team for their trust in me.

“But now it’s time to focus on Moto3, we are in the most important moment of the season and our mission is to fight for the championship.”

Team principal Michael Bartholemy was also understandably delighted with securing the signature of Marquez, especially after the Miller debacle earlier in the season.

“It has always been our goal to bring young riders into Moto2, and Alex Marquez is the perfect fit for us. He has shown he has both the talent and the drive to succeed with some impressive performances over the past two years, which are the attributes we want as we look towards the future,” he said.

“Having Tito Rabat alongside him and an experienced team behind him will help with Alex’s transition from Moto3 to Moto2 next year. I am confident that in 2016 he will be ready to step up and spearhead our World Championship campaign.”