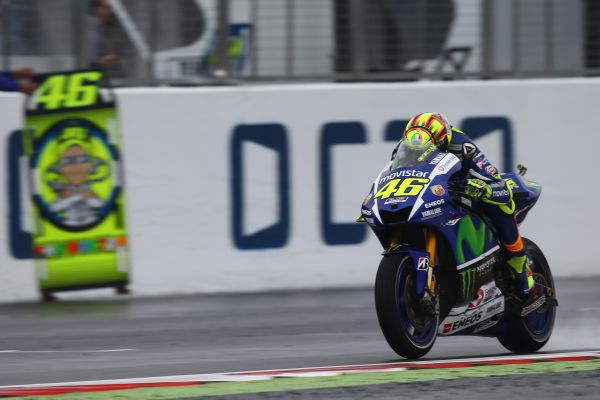 There’s no rest for the wicked as MotoGP World Championship leading team mates, Valentino Rossi and Jorge Lorenzo begin a two-day test at Motorland Aragón, running through today and Friday.

There’s been no time for Rossi to revel in his first victory in the UK since MotoGP moved from Donington Park to Silverstone, as the duo head to the north of Spain to start a two-day test, before Rossi’s home Grand Prix of Misano, next weekend.

The test will allow the Movistar Factory Yamaha team to gain valuable information for their team ahead of the Grand Prix in Aragón at the end of September, before the the triple header of flyaway races. Yamaha don’t have a great record at Aragón since its introduction onto the MotoGP calendar in 2010, with Lorenzo’s victory in the wet last year, the only Yamaha victory to date.
There hasn’t been any indication as to what Yamaha have brought along to Aragón, although it has been confirmed that the test is being run on Bridgestone tyres, so it is very much a test for this years bike, and not next years, which will see the entire field run Michelin rubber. Whilst there hasn’t been any suggestion to what Yamaha will test, it is expected they will use the track time to gain data on new parts for the flyaway races, and hope to gain information for the current progress of their 2016 bike.
The test could be especially useful for Valentino Rossi who hasn’t won at Aragón, one of just two tracks he is now yet to win at on the calendar. The other being Austin – although nobody has won there other than Marquez in the three years MotoGP have been going to Texas.
The weather should hold fair for the riders, with only a 30% chance of rain over the two days, and air temperatures of 25 degrees Celsius conditions will be nice for testing in. They will have to battle the strong wins Aragón naturally throws at riders, but the conditions should be favourable for long testing runs.
The duo will be joined by Dominique Aegerter who will be testing a revised Suter MMX2, as Suter hope to return to Moto2 with a bigger project next year, and by Fabio Quartararo and Jorge Navarro who’ll be testing for Honda on their current Moto3 machines.
With just 12 points separating Rossi and Lorenzo, every opportunity to get a psychological gain over their team mate will be important, and expect both riders over the next two days to try and gain that edge of their team mate.
Photo via Movistar Yamaha