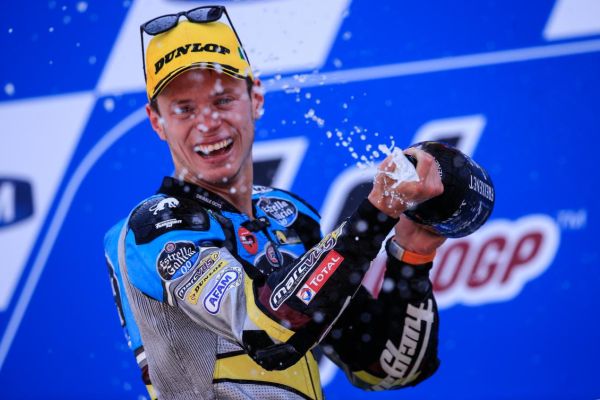 Reigning Moto2 World Champion Tito Rabat could displace Scott Redding in the Marc VDS MotoGP team, if reports in Italy are to be believed.

According to GPone.com, the Spaniard looks set to finally ascend into MotoGP with his Marc VDS team. Although they say he will get his shot, at the expense of Britain Scott Redding, taking the fourth, and final Honda RC213V. Marc VDS are supposedly unhappy with Redding’s performances on their bike this season, expecting more after suppling a close to full factory Honda, and are ready to cut ties with Redding, despite putting in so much effort to get him on the bike for 2015.

They think the steady, consistent nature of Tito Rabat is the way forward, and are ready to promote the Spaniard from Moto2 into MotoGP within the same umbrella. Rabat has a contract with Marc VDS for 2016, so any promotion into MotoGP with the same team shouldn’t cause any problems.

With Rabat vacating a seat alongside Alex Marquez in the Moto2 team, Marc VDS have looked towards young Italian Franco Morbidelli. The Italian, who is part of the VR46 young riders academy, has been a star rider with the Italtrans team in Moto2, and both parties see a move to Marc VDS as the next logical step to continue his progression. The 21 year-old claimed his first podium in Moto2 in Indianapolis earlier this season.

GPone go one to say that Redding is now negotiating with Pramac (much like every other rider in the paddock at the moment) with the Italians having an interest with Redding since his Moto2 days. Apparently talks with Danny Kent have come to a close, with the Moto3 Champion elect having to wait for his move into MotoGP, with Leopard taking him into Moto2.

Talks are at an early stage, and there is still a distinct possibility that the satellite Ducati outfit keep faith with Yonny Hernandez, who was expected to drop down to the Avintia team at the expense of a new British rider.