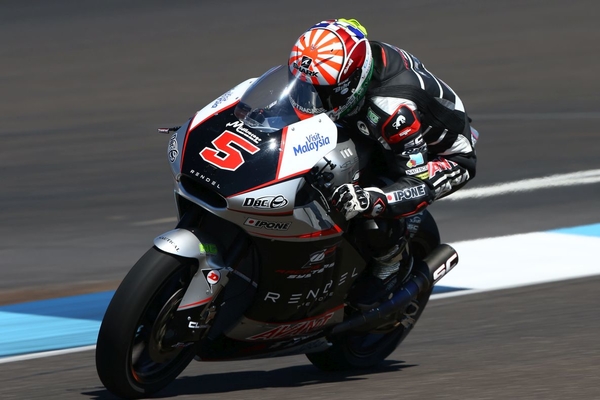 2016 will see the reigning Moto2 World Champion remain in the class and defend his title, should Johann Zarco convert his 85 point lead into his first World Championship.

For weeks rumours have been placed about the future of the 25-year-old Frenchman. Some saw him join compatriot Herve Poncharal in the Tech3 team, others saw him take the place of Nicky Hayden in the Aspar Honda team. There were even rumours that he was the man to partner Danilo Petrucci at Pramac. But with contract extensions for Tech3 duo Pol Espargaro and then this past weekend Bradley Smith and Scott Redding being confirmed as the second rider at the satellite Ducati team, options looked few and far between for the Frenchman.

Whether Zarco wasn’t actually considered for the rides, or if he wanted a more competitive package remains to be seen, but Laurent Fellon, Zarco’s manager and mentor, told Michel Turco of motorevue.com that Zarco will not be moving into MotoGP in 2016.

Instead Zarco will remain with Aki Ajo, and the Ajo Motorsports Moto2 team in 2016. 2016 will be his fifth year in the intermediate class, and he would be the second rider after Tito Rabat to remain in the class to defend his title, after the first four Moto2 World Champions all moved into MotoGP after their titles.

The question a lot of people may be thinking is why? Fellon explained that Zarco wants to get on a bike capable of winning, “and not finishing twelfth place in MotoGP”. There is a chance that 2017 will give the Frenchman a chance of landing a bike capable of MotoGP victories. Nine of the ten (including Suzuki and Aprilia) factory MotoGP seats will be vacant in 2017. A double Moto2 World Champion could have a chance to land one of the top seats.

There is also the prospect of Aki Ajo expanding his project into a three category team, with KTM coming into MotoGP in 2017. Ajo’s Moto3 team is the closest thing to a factory KTM team, and it is widely expected that when KTM make the jump into MotoGP, Aki Ajo will manage it. Despite not being the winning package that Zarco craves, his history with Aki Ajo suggests whilst riding for the Finn, he reaches his maximum and gets results. His best finish in the World Championship to date is a second place to Nico Terol in 125’s in 2011.