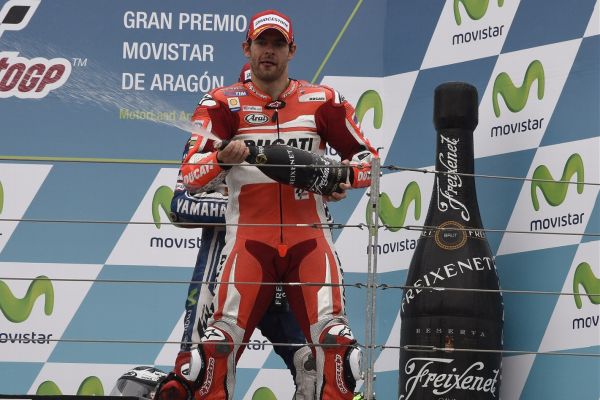 Could Cal Crutchlow be in line for a surprising return to Ducati, just one season after leaving the Italian brand?

Well, that’s what Italian website GPone.com are reporting. With all eight factory seats occupied for next season already, any movement this off-season would be in the satellite teams. Amongst the most attractive teams, is the Pramac Ducati team.

After years of being seen as the least appealing of the prototype bikes, the junior Ducati team will finally be given the respect they deserve, as Ducati equip them with this seasons GP15 that Andrea’s Dovizioso and Iannone are running this season.

Crutchlow, of course decided not to take up the second year option on his two year contract with the Factory Ducati team last season, instead opting for the LCR Honda team, riding a championship winning RC213V. However, it has not been plain sailing for Crutchlow at Honda. Difficulties over this seasons RC213V hasn’t given Crutchlow the results he’d hoped for. Due to this, Ducati have offered him a way out.

Crutchlow has just one guaranteed season with the LCR team, with an extension available, at the decision of LCR and HRC. If they decided to go in a new direction, Crutchlow would be free to move without any problems.

It is said that Crutchlow and his management have already had discussions with Ducati over a proposed move, although a final decision has yet to be made.

Should the Brit decide he does was to go back to Ducati, it looks like Yonny Hernandez would be the man to make way for Crutchlow. Danilo Petrucci is currently ahead of the Columbian in the championship standings, and in the first year of his two year deal with Ducati. Hernandez wouldn’t be pushed into the wilderness however, instead he would go back to the Avintia team, with whom he rode in 2013. It would mean another season on his current bike in 2016 for Yonny.

Whether any potential deal is being brought about due to Crutchlow’s willingness to leave, or LCR pushing him out the door isn’t clear, but it does seem strange to say the least. With the LCR team set to lose their second bike for next season, Miller will find himself on the same customer Honda RCV1000R, but under the Aspar umbrella, not LCR.

Should Crutchlow leave, Johann Zarco is the current favourite to take any seats, although he is thought to be on the wish list of both Herve Poncharal and Yamaha, even if they are set to continue with Smith and Espargaro for 2016. Tito Rabat’s uncertain future in Moto2 could be resolved by this, although, another season in Moto2 looks most likely for Rabat.

One thought on “Crutchlow in line for sensational return to Ducati?”