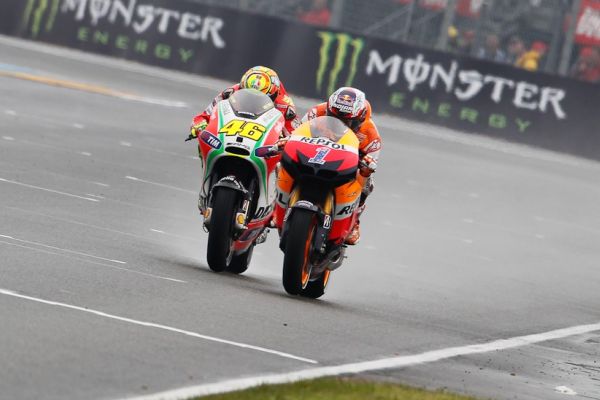 Nine-times MotoGP World Champion Valentino Rossi doesn’t see any logic in his former rival, Casey Stoner, returning to MotoGP, even if it is just for a wildcard appearance.

The Australian was in the MotoGP paddock this past weekend in Barcelona. He was on duty representing Honda, as he gave fans their first look of the Honda RC213V-S, the MotoGP bike for the road. Despite only doing the demonstration laps, rumours were rife Stoner was using the opportunity to negotiate a return with HRC officials.

Stoner has done some MotoGP testing for HRC, and will come out of retirement next month, to compete in the Suzuka 8-hour event. He also offered his services to Nakamoto and HRC to deputise for the injured Dani Pedrosa at the Texas and Argentine Grand Prix, as they were tracks he hasn’t race at before.

In spite of all this, Stoner and Honda insist there are no plans for any sort of return for Stoner. No wild-card at Phillip Island, or full time return in 2016.

But what does Valentino Rossi make of the rumours that his former bitter rival could be ready to race him again?

“Stoner was undoubtedly one of the best riders in the MotoGP class in recent years. He won races and titles, and he always fought for the podium, whether it was on a Ducati or a Honda,” said the Doctor to speedweek.com.

“But I think we in this World Cup already have enough riders,” he said with a smile. “Joking aside, this could be interesting. But Casey hasn’t raced for some time. It would make no sense if he comes back now.