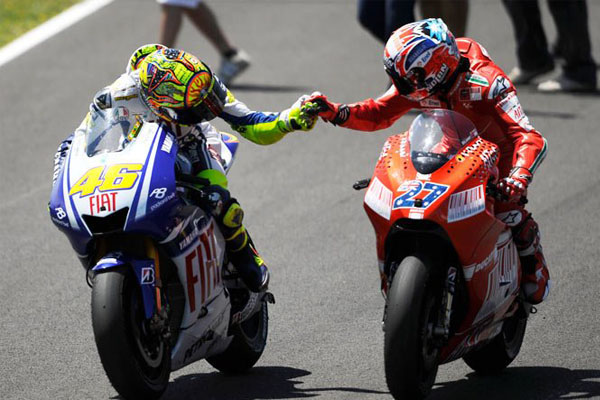 Nine-times World Champion Valentino Rossi has opened up to Rolling Stone magazine, discussing his difficult time with Ducati, and admitting that he misses former MotoGP Champion Casey Stoner on the track.

Stoner left the Factory Ducati team at the end of 2010 after 23 wins in four seasons with the Bologna squad, but he had grown disillusioned with the lack of support he was receiving, so he jumped ship and moved to the HRC Repsol Honda squad. This opened the door for Italian hero Rossi to make the move the world had been waiting for, he would join Ducati and see if the Doctor could fix the notoriously problematic Desmosedici.

As we all know, Rossi didn’t have the desired effect in Bologna, and after two winless years, Rossi left, and rejoined the Factory Yamaha squad, but his time in Ducati had taken it’s toll in the Italian.

“The first time I rode the Ducati I was shocked. After 3 laps I thought: ‘We’re in shit here!’ That was all the time I needed to realise that I’d made a mistake,” explained the Doctor.

“I hadn’t had the chance to test the bike before signing the deal, but I put pen to paper nonetheless.

“The problems were clear right from the start. I just thought: ‘OK. Let’s try to improve this bike.’ We worked on it for the entire first half of the season, but after 10 races I started to realise that I was never going to win a race on it.

“The rumours about me wanting to rescind my contract were true. But I couldn’t do it. There was absolutely no way I could. And that was actually a good thing. It would have been a big mistake. It would have been far too easy to say: ‘I’m staying at home’ when things weren’t going well. You must never give up.”

His tough times also bought out some respect for a man he had a famously rocky relationship with. Rossi and Stoner had a whole history of incidents including the 2008 US Grand Prix at Laguna Seca where Rossi run off at the corkscrew, before eventually beating the Australian reigning champion, and when Rossi inadvertently knocked Stoner out the 2011 Jerez Grand Prix, prompting Stoner to tell Rossi that, ‘maybe your ambition outweighs your talent’.

Arguably at the height of the rivalry Rossi’s legendary crew chief Jeremy Burgess said, ‘If we had that issue with Valentino it’d be fixed in 80 seconds’ in reference to Stoner’s problems at Ducati. That proved not to be the case, and with his Ducati experience behind him, Rossi has more respect for the success Stoner had on the Ducati.

“Stoner did an amazing job at Ducati. When I looked back at his telemetry I used to wonder how he’d achieve such times!” Rossi said. “People used to think he was very quick – but not particularly intelligent. And that’s why, eventually, he was successful. The reality is that at Ducati he had to go beyond the limits. Go quicker and quicker. And, if you ride like that, you eventually crash!

“We had completely opposing paths in our careers: he’d always ridden for one manufacturer, Honda, under the guidance of Luca Cecchinello. When at Ducati I think he must have thought: ‘Stuff that! This bike is good. I have to win!’

“I, on the other hand, had come from years of success with Honda and Yamaha, and I immediately realised that the bike wasn’t the best. I’m certain that, were Stoner to climb onto Dovizioso’s Ducati tomorrow, he’d still manage to finish a race in 6th place. He used to ride in an incredible way. He’s unique.

“Do I miss him? On the track, yes. He has fantastic talent and was difficult to beat. But off the track, no I don’t miss him. Without him there is much better camaraderie between the riders.”