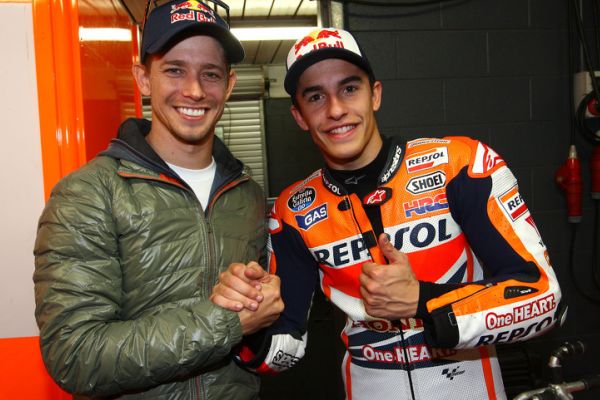 Reigning World Champion Marc Marquez has responded to Casey Stoner’s comments that he knew what was wrong with the Honda, by saying he doesn’t think that the Australian can develop his bike.

Ever since the French Grand Prix, the MotoGP paddock has been wondering what has been going on with Honda. Five Yamaha wins to Honda’s solitary win in Texas, is how the current leaderboard looks. The reigning World Champion is 49 points behind Rossi, and doesn’t look likely to reduce that gap this weekend.

Whilst nobody has managed to pinpoint the exact issue with the Honda, it’s worth remembering (especially if you didn’t read the ‘what’s going on with Honda‘ article from last week) that both Marquez and Pedrosa were unhappy with the power delivery of their 2015 RC213V, right from the first post season test. Honda then bought four new frames, way no transpires as a sign of weakness, as they tried to make their new, more aggressive engine work for 2015.

“When we tried the new bike in Valencia, we (Pedrosa and Marquez) didn’t like either of them,” Marquez told Spanish website motocuarto.com. “Then in Malaysia we tried different things, but because of the heat and humidity, the circuit has unique conditions, and can hide engine problems.”

During yesterday’s Nolan press conference, Stoner admitted he knew what the problem was, but wouldn’t expand further on what the issue was. When asked what he thought the problem was, Marquez responded by saying: “With regard to the evolution of the bike, it’s been made for the Japanese tester. When Stoner tested the bike, he identified the problem, but it’s clear after not riding a MotoGP bike for a year, you can’t develop anything.”

Now that could just be seen as a slight dig at the former World Champion by Marquez, or it could simply be an awkward way of working what he was trying to say. Stoner in the same interview yesterday said that he believed Marquez was lucky to win the title in 2013, and said Lorenzo and Pedrosa were better riders than he is, so if Marc was feeling a little frustrated at the Aussie’s comments, it would be understandable.

Marquez was honest about the state of his current bike however. “Yamaha have taken a step forward this year, Ducati too. While we seem to have taken a step backwards. But at least we can improve, and we’re fighting for a podium every race.”

Despite finding himself nearly two race-wins worth of points behind Rossi, Marquez is trying to remain pragmatic with his chances of a third consecutive MotoGP title. “There are still many points available. My goal is to recover a bit, and I feel good on the bike. Once we do that we will try recovering points and finish as high as possible in the championship.

“49 points are a lot, but there are still many races, and anything can happen. Last year, in only two races, Misano and Aragon, I lost 50 points, so whilst it’s still mathematically possible, I will continue fighting.”

Marquez did admit that he considers Lorenzo as the current rider with a target on his back, after three victories in a row, but he doesn’t think he is far behind his other rivals.

“In Mugello we worked hard. The problem is that on a race weekend it’s hard to keep trying different things. There we focused on corner exit, now in Montmeló we will focus on corner entry. I think we’ll take another small step forward. Apart from Lorenzo, who is further ahead, we aren’t far behind the others.”