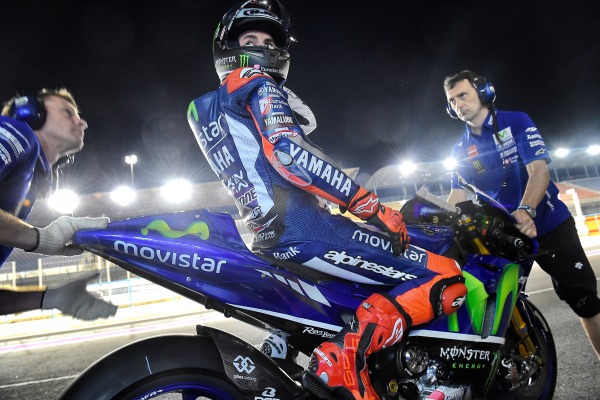 One of the few men capable of challenging the Marc Marquez domination in MotoGP, Jorge Lorenzo, struggled in the opening night to the final MotoGP pre-season test, ending the night in sixth position.

The factory Yamaha rider bemoaned a lack of grip on the notoriously dusty surface in Qatar, with the first night of running always a battle against the slippery conditions. Lorenzo, who was second to only Marc Marquez in the second Sepang test last month, struggled with a lack of rear grip during the first day, and ended the first night over a half a second behind Andrea Iannone.

Lorenzo who many consider the best candidate to dethrone Marc Marquez is in the best shape of his career. Whilst Yamaha have closed the gap to the Repsol Honda’s, announcing a full seamless gearbox this weekend for the season, a lack of grip from the rear of the bike will alarm the Movistar Yamaha factory team.

“To be honest today has been difficult to be fast,” said the Spaniard.

“Everyone has been quite a bit slower that last year. The track looks more slippery, for example the kerbs are slippery and also bumpy.

“Especially entering the corner with the rear tyre, I still don’t have enough confidence to go quicker. That is the main target for tomorrow and try to be faster in general.”

Lorenzo’s evening was considerably better than his team-mates, who ended the evening in eighth position, 0.673 seconds off the pace of the Ducati, after a fall with a fork issue.

Both Lorenzo, and Rossi will be back in action along with the rest of the MotoGP field tonight. With the threat of rain Monday, we could see some longer, race simulation runs this evening.