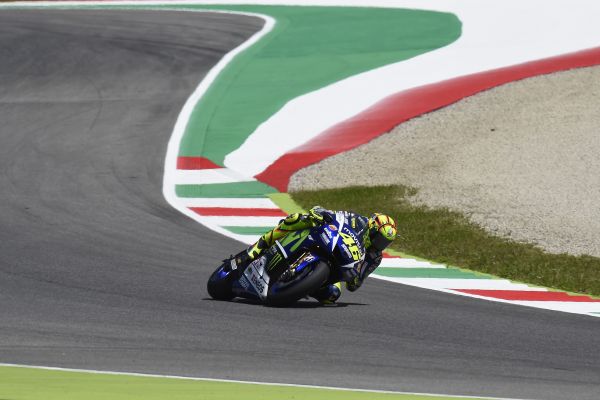 Valentino Rossi, Marc Marquez and Jorge Lorenzo have all been in action today, testing the new 2016 Michelin tyres, and all three today also lost the front end of their retrospective motorcycles during todays test.

Michelin were working with the factory riders in Mugello on trying to decide the best housing for their new front tyres. The profile of the tyre was selected after testing in Sepang, and there was hope that the housing was going to be decided today too. It now appears that a lot of work is required with three of the top riders in the world all suffering the same crash.

All three riders suffered fast, front end crashes. Lorenzo was the first to fall, when he went down at the left handed Materassi. Moments later, Marquez suffered his third front end crash in as many days, although this time he went down at the right handed Correntaio in front of the Ducati grandstand, rounding out a miserable weekend for him and his Repsol Honda team. The fastest of the three was undoubtedly Valentino Rossi’s who crashed through Arrabbiata 1 just before 17:30, the exact same space where Crutchlow crashed and dislocated his ankle just over 24 hours earlier. (GPone and photographer Alessandro Giberti captured a great sequence of Rossi’s crash, which you can see here)

Fortunately all three riders were unharmed from their crashes, although the team’s mechanics will have a long fourth day working at the circuit, before all the bikes get packed up and shipped to Montmeló for the seventh round of the World Championship.

Despite a lack of front end feel, the riders are generally happy with the overall performance. But the dramatic nature of the crashes, and at the speeds they are happening will start to concern riders, who may end up risking injury, and jeopardising their 2015 after getting injured in a test they’re forced to compete in.

The rear tyres being tested are generally generating very good grip, and they are happy with that. But the front end issues are starting to become a bit of a concern for the riders.

None of the bikes were fitted with transponders, so none of the lap times were official. But according to GPone.com, Jorge Lorenzo was the fastest of the riders in action today, with a 1.47’7 – which was 1.2 seconds slower than his qualifying time, which was good enough for second place on Saturday afternoon. Marc Marquez’ fastest lap was a tenth slower, with Rossi two further tenths behind Marquez. The conditions were hotter today, and with tyres still being worked on, it’s unrealistic to expect lap times to be as fast as they are with Bridgestone tyres.

Michelin had hoped the riders would complete full race simulation on the tyres, but the physical demands of a MotoGP season means riders are running shorter spells than full 20 lap runs.

The Mugello test was a big one for Michelin, who bought a lot of people to Tuscany – including their chemical engineer – as well as four different front tyres to test. It appears that work is still required, and it wasn’t the first front end tyre issue for Lorenzo, after he suffered the same fate in Sepang earlier in the year.