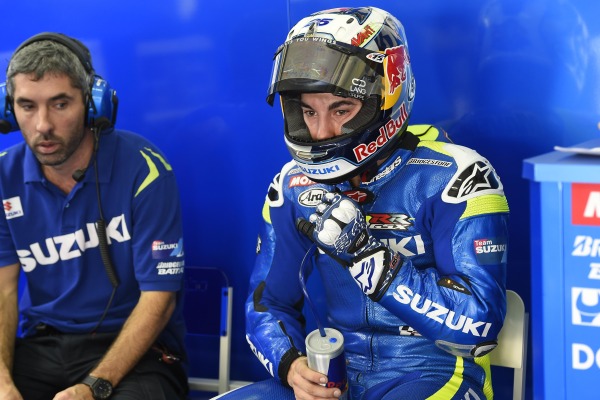 MotoGP class rookie Maverick Viñales has said she is slowly adapting to the stresses and strains of being a MotoGP rider.

Viñales, who will head Suzuki’s return to MotoGP along with Aleix Espargaro, will be making his debut in the premier class of Grand Prix racing after just one season in the Moto2 class, where he finished rookie of the year.

In a class of four rookies, Viñales has been, by far and away the most impressive of the quartet, finishing the second Sepang test 14th, just under a second and a half behind Marc Marquez’ fastest time of the three days.

“I’m happy because we have improved a lot especially with my rhythm,” said the 20-year-old at the launch of his 2015 GSX-RR via motorcyclenews.com.

“I’m still not completely confident with new tires, in Moto2 to make a fast lap you had to heat the rubber first six laps. The Bridgestone are completely different. You have to do it the first or is it half second slower. Anyway, happy because despite everything we have done a good time. Especially we have worked in the grip of the bike, conserve more tire.”

Viñales hasn’t been the first (although he may be one of the worst, with the switch to Michelin for 2016) to struggle with the, unique, Bridgestone tyres. But he is finding the electronics that a MotoGP bike is fitted with a bigger challenge than the tyres.

The Moto2 machine has minimal electronic aids fitted, and during his first three tests on his Suzuki, Viñales has ridden with minimal support. Something he will have to slowly adapt to during the final test in Qatar.

“I still use too much traction control, want to learn well and it is clear that we are improving every day, but Aleix may be 7 or 8 steps ahead. I am very happy with my adaptation because every day I feel more comfortable with my bike, with speed.”