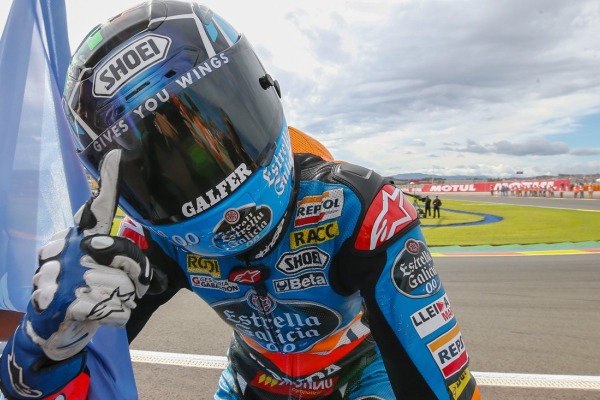 HRC Vice President Shuhei Nakamoto has admitted he is surprised at the level of progression shown by 2014 Moto3 World Champion, Alex Marquez.

Marquez’ progression in the Moto3 class was almost as drastic as his brothers in the big classes. He made his debut in the World Championship as a second half of the season wildcard, where he scored 27 points in eleven races, including three DNF’s. He then managed to finish his first season as a full time rider in fourth position, claiming his maiden Grand Prix win in Motegi, before going on to win the title last season. Honda’s first in the smallest class in nine years.

Last season, along with winning the world title, he won three races, with a further seven podiums, which saw a very happy Shuhei Nakamoto treat Alex to a afternoon “test” on his brother’s championship winning RC213V in the first post season test in Valencia.

“Alex has grown a lot in the last two years and every single race he has been improving his performance and I am very happy with him,” Nakamoto told MCN.com.

“Marc probably has more natural talent but Alex is a hard worker. But hard work can win you the championship. Of course Marc also trains very hard but he has a lot of natural talent.

“To be honest I am surprised that Alex has achieved this level. I didn’t expect that Alex could arrive at this level and I am very happy for him.”

The next step for Alex is the Moto2 class, and he will join close friend, and reigning Moto2 World Champion Tito Rabat in the Marc VDS team, which dominated the Moto2 class last season.