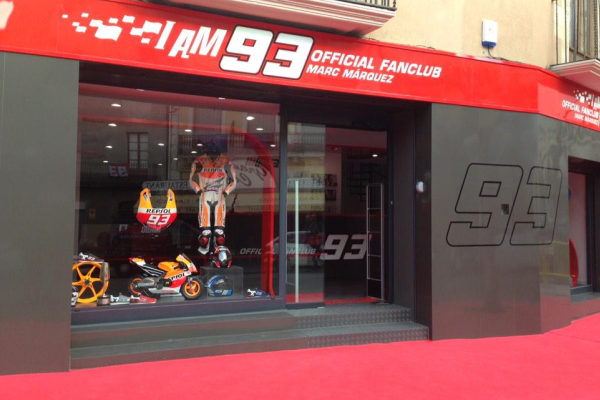 Double MotoGP World Champion, Marc Marquez, has opened a new headquarters for his fan club, in his home town of Cervera, Spain.

The official 93 Fan Club was launched the year Marc won his first World Championship, the 125cc title in 2010. His first fan club meeting had no more than 300 members, and it was held in a hotel just 200 meters from his family home. Today, the 93, and Alex Marquez fan club, which is run under the same banner, boasts over 1,700 members.

“I want to thank all who have made this possible,” said Marc Marquez at the opening of the fan club.

“It’s fantastic that you can visit this exhibition with all these souvenirs of mine, and that the fans can see them, and that we have this new headquarters. The truth is that I was surprised, it’s impressive and it’s really beautiful.”

Marquez’ fan club base has a replica of his title winning RC213V, as well as all sorts of Marquez memorabilia, including leathers and helmets. There is also an official store, selling all the Marquez merchandise fans could wish for.

“Today is a very special day for all of us as we have turned yet another dream into reality,” said Ramon Marquez, the club’s president, and uncle to the World Champions.

“From here we can unite all the followers of Marc and Alex, all the fans of motorbike riding, and they can check out whatever facts they wish about them, or become part of the fan club, get exclusive content or participate in the many events we will be organising in 2015.”