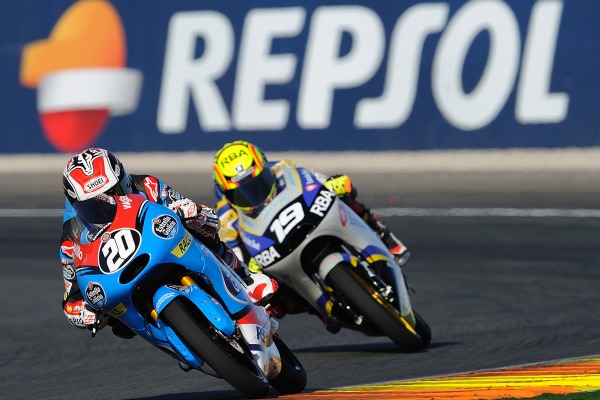 CEV Repsol Moto3 Champion Fabio Quartararo signed off from his hugely successful spell as a Spanish Championship rider in style with a double win in Valencia. His next stop, to take Alex Marquez’ vacated seat in the Moto3 World Championship.

The double Spanish champion already had the championship sewn up before the final meeting in Valencia, with Jorge Navarro unable to ride in Portimão due to a logistical difficulty, but it didn’t leave the Frenchman’s motivation waining. Quartararo won both races in Valencia, the first after a close battle with Jorge Navarro, his team mate for next season in the World Championship, and in the second one with a performance that has become so synonymous with Quartararo in the CEV Championship.

“In the first part of race one, I was not very good,” the Frenchman confessed after the first race of the weekend.

“Jorge Navarro pushed hard from the start and managed to open up a gap and I was trying to stop Jorge escaping, but after just three laps they put the red flag out. Then upon the restart, I saw there was only nine laps, and I thought that I had to be stronger than the first time, so I tried to get away. I started well, but I couldn’t pull a gap because Jorge had good pace. I fought with him, until the last three laps, and ultimately I came first and won the race.”

Quartararo’s pace in the first race was consistent and it eventually told, with Navarro crashing out trying to stay with the French teenager two and a half laps before the chequered flag.

The second race was more comfortable for him, as he finished ahead of Gabriel Rodrigo and a wildcarding John McPhee, two riders who Quartararo will be racing against next season in the World Championship.

“I think we have done really well all weekend, ” he added after the second race. “On Friday we started working on a so improve in the wind and in the second race we did really well. I still felt more wind than in the first race, especially in the corners it was much more noticeable. However, I did well, and I think it was a fun race.”

Quartararo’s success had forced the FIM to change rules regarding the minimum age limit in the World Championship. The minimum age limit for Grand Prix racing was changed to 16 recently, but for 2015 it was once again changed to allow riders who are under 16, but the reigning champion of a FIM authorised championship, as the CEV Repsol championship is, to compete as a full time rider providing they turn 16 during the season.

It had prompted people to suggest that it was done specifically for him, but Quartararo dismisses that notion, pointing to the last two MotoGP World Champions, Jorge Lorenzo and Marc Marquez, both made their debuts in the World Championship as fifteen year olds.

“Presumably the decision has been taken because they believe that the FIM CEV Repsol champion has a sufficient level to race in the World Championship,” he said whilst speaking to French publication L’Equipe.

“Also I will not be the first to debut at 15. With the regulations from a few years ago, several riders did it including Lorenzo and Marquez.”

Quartararo makes a valid point. Along with using Lorenzo and Marquez as an example, few would argue that he is ready to make the next step up in motorcycle racing. The CEV Repsol Championship is widely regarded as the best feeder series for the Moto3 World Championship. Two world titles in two seasons, as well as beating a Grand Prix regulars like Masbou and McPhee this past weekend shows the pace he posses. As well as impressing when matched up against Grand Prix regulars, he also impresses when matched up on the timing screens.

Quartarato’s pole position time for the Catalan round of the CEV championship this season was a 1.50.135, which was the fastest ever Moto3 lap around the Circuit de Catalunya. The previous best was Alex Marquez’ pole position time when the Grand Prix boys were there, and his lap was a 1.50.232.

Quartararo will be hopping directly onto a bike he is familiar with after riding the Honda in the Spanish Championship and a bike which has just won the 2014 championship, there is no reason as to why Quartararo cannot make it three Moto3 championships in as many years.