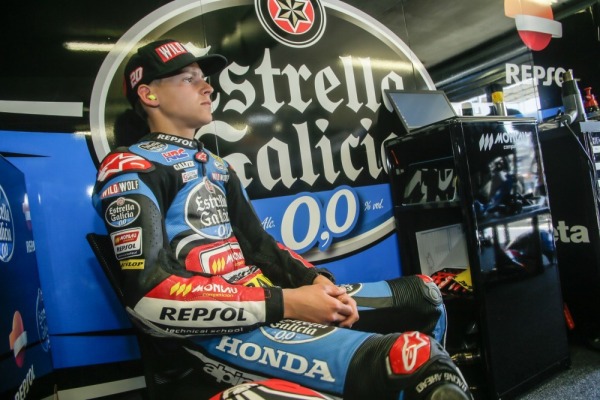 Spanish Repsol CEV Championship leader Fabio Quartararo is firmly on the radar of HRC bosses after his sensational start to the season.

The 15-year old Frenchman rides for the Emilio Alzamora run, junior Estrella Galicia 0,0 team in the CEV Repsol Spanish Moto3 Championship, and he currently sits at the top of the championship by 38 points ahead of Jorge Navarro after just four races. Quartararo has won three of the four races this season, with his team mate Maria Herrea pipping him to the line in the second race at Jerez. His pole time for the last race at Aragon would have been good enough to give him the pole position for the 2013 Moto3 World Championship race.

This has attracted the attentions of HRC Vice President Shuhei Nakamoto as well as many other big names at HRC, who are immensely impressed with the work of the Frenchman.

It would appear he would be set to naturally be promoted into the full Estrella Galica 0,0 team in the Moto3 World Championship, but his age is proving to be a barrier for HRC and Nakamoto.

Quartararo is only 15, and will not be 16 until the 20th April 2015. If the calendar is the same as 2014, then Quartararo would miss the first two Grand Prix’s of the season. By the time he turned 16, and became eligible to race, he could find himself 50 points behind a championship rival.

What HRC and Alzamora decide to do with Quartararo for 2015 will be an intriguing case to watch. With one of, if not both of Alex Rins and Alex Marquez expected to make the jump to Moto2 next season, will Alzaramora decide to simply promote Herrera and Quartararo, with the Frenchman missing the opening race or two. Or will they decide to run two full time bikes, and add Quartararo when he is eligible or will they just limit the Frenchman to wildcard performances.