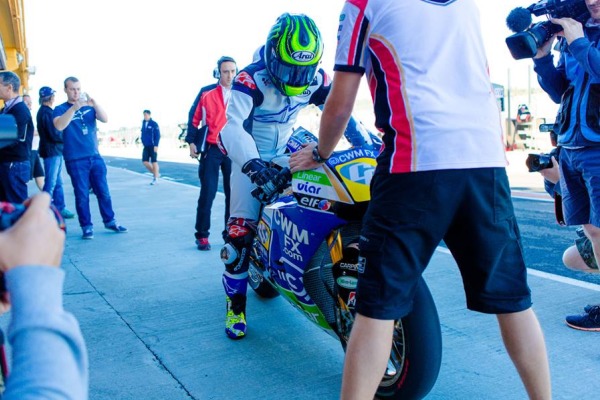 Cal Crutchlow’s end to 2014 summed up his whole season, as he suffered a crash on the final day of testing, breaking his right thumb and cracking his left knee – before going back out and setting his fastest lap of the test!

In a season faced with challenges, Crutchlow was on his new LCR Honda RC213V for the final time before the winter testing ban kicks in. The Brit was heading into turn one when his knee slider went through a puddle, flicking water onto his rear tyre, causing him to almost get thrown down to turn to, in what he described as the second biggest crash of his career.

With still over an hour remaining when Crutchlow crashed, he got back to the pits, and hopped on his second bike. On his second bike he posted his best lap of the day, which was a 1:31.774, which was good enough for him to end the test in eighth position, eight tenths off of Marc Marquez’ fastest time of the test.

“It was my second lap with the new tyre. The first lap I scrubbed it in. I turned in so tight – I put my knee in a massive puddle [on the inside] at turn one and it went on the back tyre.

“It came round so fast my throttle suddenly went to 100 percent. I had water on the back tyre, nearly went off on a high-side, then I because it came out so fast [I crashed].”

“I definitely have a broken thumb and they think two cracked knees. I was dazed [and] I didn’t get up fast. I rode the bike back but they don’t classify that as a crash. That was serious. I would say after my Texas crash, the biggest one that I’ve had. I was really pleased to go back out. There was only an hour and fifteen left when I crashed and I went faster immediately so I’m pleased with that.”

Crutchlow was understandably delighted with his time at the end of the day, a time he did on used rubber and in considerable pain after his crash. On Monday Crutchlow also managed his best lap at the end of a long run, on a used tyre, something that has left the Brit happy with his testing work.

“I never benefited very well in the lap time but I did the same time with 25 laps on the tyre as what I did with four laps on the tyre. It’s just about feeling comfortable. I’m getting on well with the Honda and the way that we’re working.

“We played a lot more today [with settings]. We were just doing too many things with the bike but I was consistent. I know where I need to gain time and was trying different maps, different engine braking stuff. To put the lap together was quite difficult but I felt comfortable. I’m not worrying about the position or the lap time at all.”