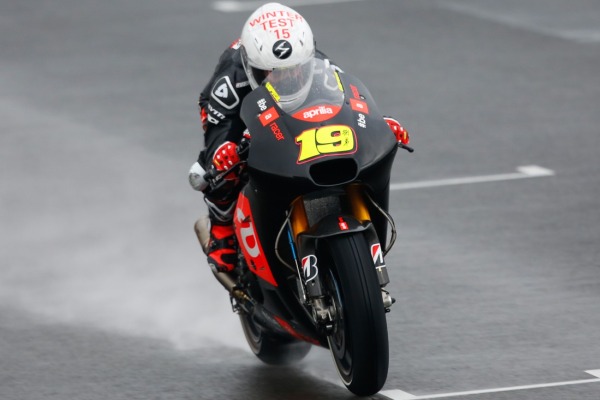 Aprillia’s return to MotoGP in the hands of Alvaro Bautista continued today, with their first official run in the wet; and he was pleased with what he got from his new bike in the wet.

The Aprillia effort will feature a full pneumatic valve engine for the 2015 season, however, in the wet conditions, Bautista elected for the RSV4 superbike engine, as he looks to familiarise himself with his new machine. The bike that Aprillia will be running next season is a hybrid bike between the ART bike and the RSV4 production superbike.

With the pneumatic valve engine not expected to be given to Bautista or team mate Marco Melandri until the first Sepang test in February, Bautista explained that the three days in Valencia, and three in Jerez were all about getting used to his new bike, and his new team.

Bautista managed to post 49 laps in the wet today, the most of any rider who took to the track today, and he ended the day 1.3 seconds off the pace of Danilo Petrucci, but more impressively, only 0.014 seconds behind the fastest lap managed by Valentino Rossi.

“Today was just to understand and to try and work with the team because yesterday [Monday] I just did a few laps and we didn’t understand too much,” said the Spaniard.

“For sure the bike is different than what I rode before. I have to understand and change my riding style. I feel comfortable. I can improve a lot.

“Myself with this bike I feel like the riding is more easy than the Honda in wet conditions. We have to go more, especially with the engine because there is much less power than the other one.

“I’m happy with today. It’s different because today was wet and quite cold. I remember in wet conditions with Honda I’m struggling on the exit from the corner. This bike is completely different. On the bottom you have more torque and a different engine character. I don’t remember when was the last time in the wet that I improved every time. With the Honda I arrived at one point and couldn’t improve because of no rear grip. Today I felt good when I go out to the track – improve, improve, improve – that was a positive thing.”

Bautista was also very complimentary of the bikes power delivery in the wet conditions. Despite riding a bike very much turned down, and a long way off what the final product should produce come April.

“I was surprised with the engine for sure, because on the bottom you have a lot of torque and you can exit from the corner good. But on the straight it’s so slow! But it’s normal because this is a Superbike engine, the character.

The Aprillia duo, along with test rider Alex Hoffman will stay on in Valencia tomorrow, before testing in Jerez at the end of November before the winter testing ban kicks in on the first of December.