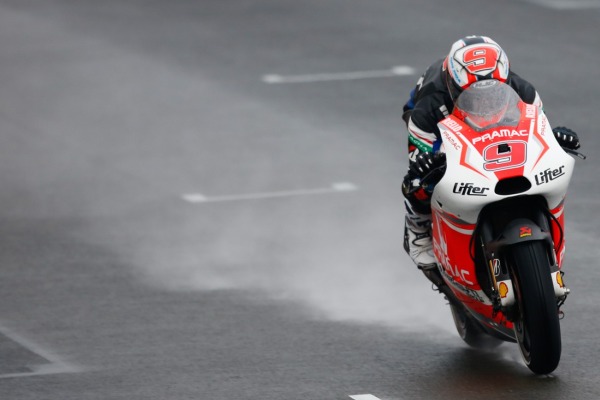 The Italian, who has earned himself a two year contract with the satellite Ducati team, after battling at the rear of the field for the past three years as part of the IODA racing project, was the third busiest rider in Valencia, recording 23 laps.

Despite a small crash into turn one as conditions worsened in the afternoon, Petrucci was fastest by over a second faster than Aspar Honda rider Nicky Hayden, on his Ducati GP14.0. Petrucci is currently riding the GP 14.0, but is expected to at least be on the GP14.2 by the first race of the season in Qatar.

“It was a useful day to get used to the bike in wet conditions,” said the Italian.

“It was very cold and the asphalt has never exceeded 13 degrees. It was not easy but I felt good as the wet conditions are not a problem for me.

“I’m sorry for the crash, but fortunately there were no significant damage to the bike. I’m happy for the fastest time and especially for the first two days of test with Pramac Racing. I feel very comfortable with my new team.”

Petrucci was one of four riders to crash today, with Cal Crutchlow, Scott Redding and Loris Baz all also fell in the slippery conditions.