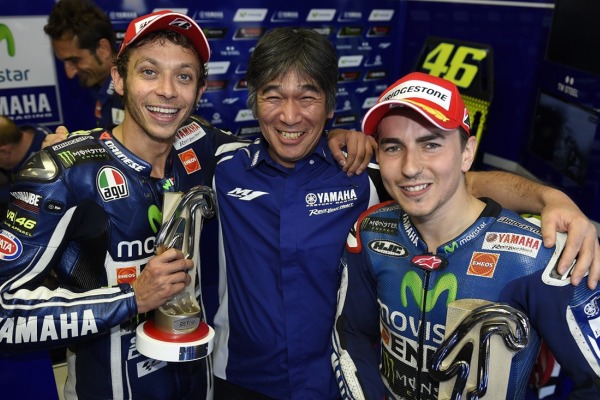 Valentino Rossi has admitted he is concerned for his chances of finishing in second place in this seasons MotoGP World Championship, due to the lightning pace shown by his team mate in the second half of this season.

With Marquez securing his second MotoGP World Championship this past weekend, all the focus has now shifted to who will finish behind the Spaniard, with three riders separated by just three points. Jorge Lorenzo’s remarkable run of four second places and two wins since the summer break has since him close a gap to both Rossi and Pedrosa significantly, to the point where he is now favourite to finish runner up once again.

“We have a second place contest between me, Jorge and Pedrosa and I’m worried because Jorge is so fast. We have to give the maximum,” said Rossi, who was over 50 points ahead of Lorenzo going into the summer break.

“I love Phillip Island and Sepang but three races in a row is always very difficult and a good start is very important.

“The podium of Japan was another positive result, especially because I have done well throughout the race and was very close to Marquez and Jorge. We held a very high pace and my bike was working very well.

“I really like the Australian GP and I want to ride a good race here, partly because most of my team is Australian. I want to get back on the podium and try to win again,” added the Italian, who like Pedrosa has won one race this year.

“We are working well, I like the circuit, and the Yamaha is going strong, so I think we can do it. I’m in a good shape, so it will be a fun battle.”