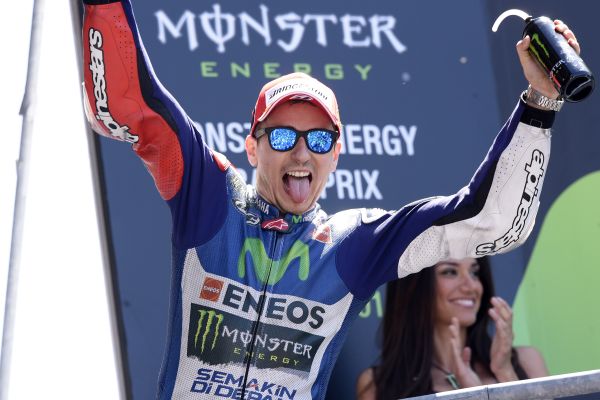 Jorge Lorenzo closed the gap on MotoGP championship points leader by five points after leading the Movistar Yamaha team to a one-two in the sun of Le Mans. The Yamaha riders were joined on the podium by Ducati’s Andrea Dovizioso, whilst reigning World Champion Marc Marquez overcame the challenges of Andrea Iannone to finish in fourth position.

The day however, was all about Lorenzo. The Mallorcan started in third position, and managed to end up leading after the first chicane, he would never be caught.

“Before the race I was a little bit worried about the front tyre on the right side, because it was close in some corners,” he said. “Sometimes that’s worse in the race on Sunday, because it’s hotter at two o’clock and you have more fuel in the tank and push more on braking. On the third or fourth lap it started closing, and I started worrying that I had an ever worsening tyre in the next laps, but luckily for us the tyre stayed more or less the same. It was close in the whole race, but not becoming worse.

“I was pushing the whole time and when the fuel tank ran low I pushed a little bit less. So this time we have been lucky. I know that other riders also struggled with the front. I could improve in some areas because I lose out in some corners.

He continued, “It was important to be second and overtake Marc at the start and Dovizioso in the first corner. This is the way I prefer to ride, because with nobody in front I can brake perfectly, keep the corner speed and try to increase the gap, so that is what happened. It was difficult because Andrea kept a gap of under a second for a long time, but finally I could stay ahead by 1,2 or 1,4s.

“Then, when I saw Valentino in second place and in some place close in a little, I had to try to push so much, especially on braking, I could brake later and later and rode a 1’33,004, which gave me the advantage I needed to win this race. Winning two races in a row after finishing outside of the podium in three Grand Prix is a big contrast.

“These are much better results, but you have to keep your feet on the ground and not hesitate, because things can change very quickly and I can have bad results in the future. Mugello is a good track for Yamaha and especially for me, because it’s my favourite track, but Valentino is also very fast there, so who knows what’s going to happen.”

Marquez struggled with feel at the front of the bike, especially in the early stages of the race, but saw the bike come back to him, and limited the damage, but he wasn’t his usual masterful self.

Behind Iannone, Bradley Smith capped off an impressive performance with a very good sixth position. Smith’s team mate Pol Espargaro was seventh, albeit he never saw his team mate. Yonny Hernandez, Maverick Viñales and Danilo Petrucci continued this impressive starts to the season to complete out the top ten.

Honda riders struggled with front end feel, and Dani Pedrosa, Cal Crutchlow, Scott Redding and Jack Miller all crashed out in the early stages of the race. Although Pedrosa did manage to remount and finish the race, lapping impressively in what will be encouraging signs as the Spaniard continues to recover from his arm pump surgery.