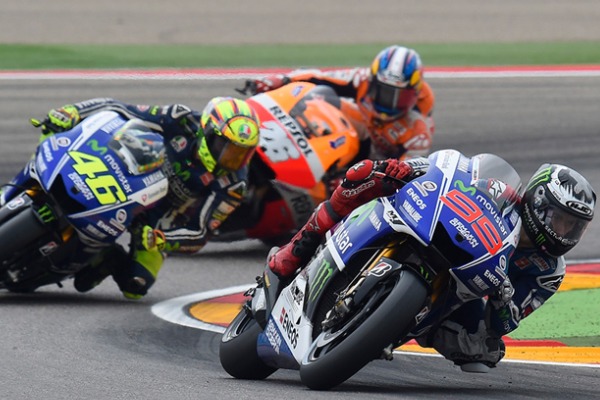 Jorge Lorenzo returns to Motegi this weekend sky high on confidence after claiming his first win of the 2014 season last time out at Aragon.

The former World Champion has been enduring his most difficult season in MotoGP to date, and had to wait to the flag to flag race in Aragon to claim his first win, but it is something he is delighted to have finally achieved, and got the monkey of no win this season off his back.

Lorenzo timed his change from slick to wet tyres to perfection, whilst both Marquez and Pedrosa crashed out in front of him staying on dry tyres.

“First of all I would say it was a fantastic feeling to win at home in Aragón,” said the Mallorcan, who has won at least two Grand Prix every year since making his debut in the premier class in 2008.

“We were able to manage a difficult race and taste the first victory of the 2014 season, which was amazing after a disappointing start. We solved many problems during the weekend and did a great job on Sunday with the whole team.”

Last season Lorenzo managed to upset the form book, and claim a three-second victory over Marquez at at the home of Honda. Something Lorenzo is hoping he can do once again.

“Now we are traveling to Japan, a country I love for many reasons. I have great memories from last year, when we surprised everyone with a huge success in our rival’s home. Last year we won at Motegi and also achieved the 200th victory for Yamaha in front of the two Honda bikes. It was unbelievable!

“Hopefully we can repeat it this time with another perfect weekend.”

Lorenzo is now just 15 points behind Dani Pedrosa, and just 12 behind Valentino Rossi as the race for second in the World Championship hots up.

Team mate Valentino Rossi acknowledged the challenge coming from his team mate in the hunt for second place, and he is determined to bounce back after his scary crash in Aragon last time out.

“Aragon was a very difficult race weekend but there were also many positive aspects,” said the Doctor.

“First, the bike was really ok on Sunday. I immediately felt good on the bike as soon as I arrived on the grid. In the first laps I was able to make good overtakes and stay with the top three riders. My team did a really good job.

“Another positive thing is that I have not done any [harm], apart from the big headache the next few days! I feel very well and I look forward to the triple header overseas races because I am feeling better and better on the bike and the team are working really well.

“The fight for second place is getting interesting, we will try to achieve the best result possible! Japan is not one of my favourite tracks but also Aragon was not and still we went very well. We will see. It’s Yamaha’s home GP and we will do our best to get a good result!”

Valentino Rossi hasn’t finished in the top two in the World Championship standings since he last won the MotoGP title back in 2009.