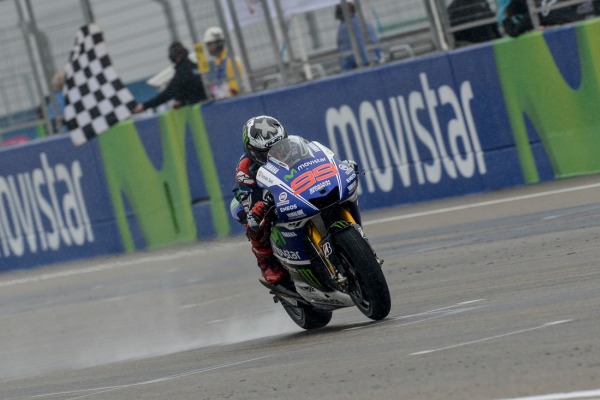 Jorge Lorenzo won the 800th Grand Prix in dramatic fashion in a flag to flag race in Aragon to win his first race of the season, as Marc Marquez, Dani Pedrosa and Valentino Rossi all fell in Spain. Lorenzo was joined on the podium by two open class bikes for the first time in history, as he was joined by Alexi Espargaro and Cal Crutchlow who both benefited from strategic pit stops.

Lorenzo got a good start off the third row, however it was Andrea Iannone who led the early stages after starting from third position, however the Italian crashed out half way through the second lap when he ran wide just before the “bus stop”, running off track he had to lay the bike down.

The factory Honda and Yamaha riders pulled away from Andrea Dovizioso and Pol Espargaro, before Valentino Rossi suffered a nasty high side after having to run wide to avoid running into the back of Dani Pedrosa. The Italian was stretchered away, before going to the medical centre. He was deemed ok, but was then taken to hospital for precautionary head scans.

With the front three away, it seemed as if Marquez might be able to show his pace and stretch the lead out, that was before the rain started to fall. With the laps counting down quickly there was a real reluctance to pit from the front three. Behind them Aleix Espargaro was the first to pit, and a lap later all of the riders behind the front five pitted.

Andrea Dovizioso crashed out of fourth position and that was enough to force Lorenzo and Pol Espargaro to pit, and it proved to be the perfect lap to do so. On the first corner of the next lap, Dani Pedrosa, who stayed out crashed out and a lap later Marc Marquez crashed out in the opening sector too. Both  Repsol Honda riders remounted, and Pedrosa took 14th with Marquez  finishing 13th.

Lorenzo was the beneficiary of the crashes after timing his pit stop to perfect to take his first win of the season, obviously much to the delight of the Spaniard, who also took Yamaha’s first win at Aragon in doing so.

“What a race, unbelievable! Everything happened, our sport is crazy and full of ups and downs,” said the two-time MotoGP World Champion.

“Today was very positive and you have to be very focused in these conditions. Knowing when to change was very tough and we got some luck to help us out too. I gave everything to stay with Marc, it’s a combination of things. The low temperature helped us. Our second tyre in Q2 was not good so I knew we were faster. I was able to carry a lot of speed in the corners so I was upset when it started spitting, as I had to roll off and the Hondas pushed ahead. I had settled for third or fourth,” he said.

He continued, “I saw the time on my board and saw the times were dropping too much, I made a last second decision to swap in the box and we got some luck. I was able to stay comfortable in the wet.

“Speaking with the team before the race we thought we could get third, never a win. But finally the rain came and there were some crashes and we got some luck despite all our problems. It’s also the Movistar GP so it’s the best track for us to win at!”

The top five was completed by Stefan Bradl and Bradley Smith who pipped his team-mate, Pol Espargaro, to the line by 0.203s.