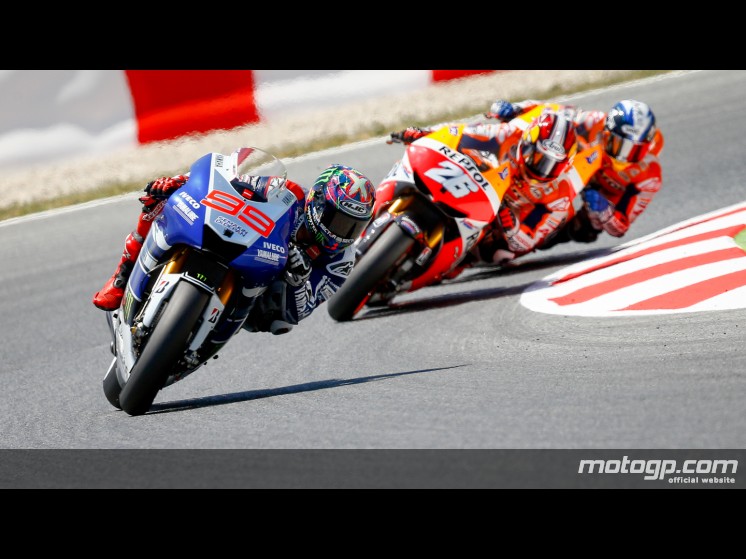 Reigning World champion Jorge Lorenzo closed the gap at the top of the MotoGP world championship with a stunning victory at Catalunya ahead of Dani Pedrosa and Marc Marquez.

Despite trademark fast starter Dani Pedrosa starting from pole, it was Lorenzo who got off the line fastest, and ended up taking the whole shot into the first turn.

Despite immense pressure from both Repsol Honda’s for the first 18 laps, Lorenzo finally managed to break the Honda’s, and cruise home for his third win of the season.

“A perfect day,” Lorenzo begins. “To be honest I didn’t expect to win; I knew I had some chance, but not like in Mugello where I was more convinced we could get the victory. It was really difficult physically as it was the hottest race of the year. I kept pushing 100% all race because any mistake would have been a disaster.

“I was surprised at the start, as I expected to just pass Cal but I passed Dani as well. I took profit from it and tried to open the gap but it was not enough to get away; Dani was there and we played some games. Finally, because I was tough mentally and never gave up, I could open up a little gap in the last five laps that was enough to win.”

However as Lorenzo managed to pull away from the Repsol Honda’s the action wasn’t stopping. Marc Marquez then began to apply pressure to his team mate, and a battle ensued for the final third of the race.

The closest the rookie came to making the pass stick was on the penultimate lap. Marquez went for a move up the inside of turn four, but Pedrosa chopped back across the nose of Marquez, forcing the rookie to hit the brakes and almost causing Marquez’ Honda a big front end shake.

Despite the scare, Marquez continued to press, but just run out of laps and would finish just 0.090s from Pedrosa.

Valentino Rossi finished a very lonely fourth place, nearly six seconds behind his team mate, but it was a good result for the Doctor as he looks to get his season back on track. Rossi was fifth after the opening exchanges, but was gifted a spot when Cal Crutchlow crashed out losing the front of his M1 during the fifth lap.

Stefan Bradl finished another impressive fifth position as he looks to progress on his LCR Honda. The German was battling with Nicky Hayden early on, until the Kentucky Kid lost the front end of his Ducati, sending the American angrily tumbling into the gravel pit.

Bradley Smith took a career best sixth position despite his injuries, and over took factory Ducati’s Andrea Dovizioso on the penultimate lap which will be bound to help the confidence of the Tech3 rookie.

Once again Aleix Espargaro finished top CRT rider with an impressive eighth postion, just ahead of a resurgent Colin Edwards on his NGM Forward Racing CRT, with Ducati’s Michele Pirro closed out the top ten.

The race of attrition did see a good story for 38 year-old Javier Del Amor. The Spanish championship rider was conducting paddock tours at his home race, but when Aoyama was ruled with the injuries he sustained in Mugello, the Avintia team called him up. Despite being lapped, he will go home tonight with a world championship point.