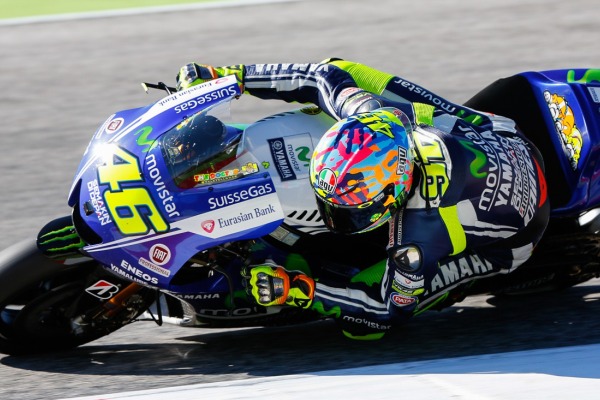 Valentino Rossi’s 15 month wait for a MotoGP win ended in Misano this afternoon, with the Doctor winning at his home circuit after World Championship leader Marc Marquez crashed out. Rossi was joined by team mate Jorge Lorenzo and Dani Pedrosa on the podium.

Rossi took the lead from Marquez after the Spaniard took the whole shot from pole position, but after a close battle with Marquez, Rossi managed to get out front in the early laps. Marquez soon followed Rossi past Lorenzo, and another battle between the master and the apprentice ensued.

However, with reigning World Champion Marc Marquez hung on close to Valentino Rossi, and on lap 10 suffered an uncharacteristic mistake, sliding off at the Rio corner. Despite, eventually getting his Honda RC213V restarted, he was nearly a lap behind the leaders, and could only salvage a point in the final lap.

With no Marquez to interfere, and Lorenzo struggling with the harder front tyre, it was the Valentino Rossi show, as he eventually came over the line a second and a half ahead of his team mate, to claim his 107th Grand Prix victory.

“During the weekend we understood that the Yamaha was very strong and that we had a small advantage over the Hondas. In cases like this where Marquez wins it seems a little difficult, but you get motivated because you think ‘today could be the win,’ but it is always hard. We worked well with the team and made a good qualifying,” said Rossi.

He added, “I had a good start to the race and battled with Marc and Jorge, I knew Marc wanted to stay in front. After I saw the board and understood that he had crashed or something it was a little easier as I already had a small advantage over Jorge. It has been five years since my last victory here, a similar race too, it’s like a time machine!”

“My first target was to win a race, this was a better win than Assen. In Assen Jorge broke a collarbone so he was not so solid. This year I’m faster, I finished four times behind Marquez in second. Now we can fight with Dani for second,” he concluded.

Lorenzo’s gamble with the harder tyre didn’t pay off, and despite Marquez’ crash he couldn’t match the pace of his team mate, leaving him with his fourth successive second place finish, in what has been a frustrating campaign for the two-time MotoGP World Champion.

Dani Pedrosa rounded out the podium, in what was a difficult race for the Repsol Honda team, however, he did have enough to hold off the ever impressive Andrea Dovizioso who finished just 5 seconds from Rossi and 1.2s off the podium yet again, as the gradual developments of the Ducati take place in what is encouraging signs for the Bolgona factory.

Andrea Iannone had a yet another solid, but lonely race as he backed his front row start up with a fifth position, but was six seconds behind Dovizioso and six ahead of seventh place, and top rookie Pol Espargaro. Bradley Smith’s late race pace wasn’t enough for him to catch his team mate, with the Brit crossing the line in seventh position.