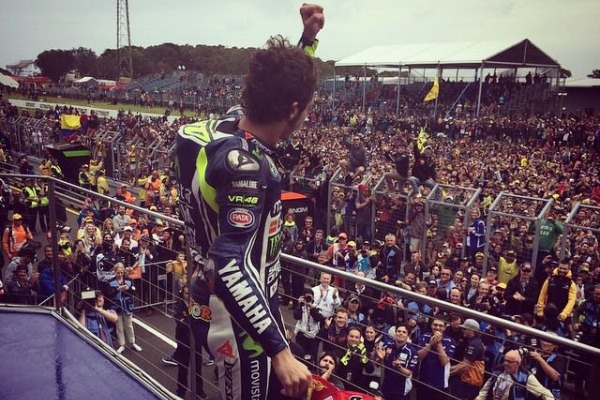 Valentino Rossi took a commanding position in the hunt for second place in the MotoGP World Championship standings, after claiming his second win of the season, winning the Australian Grand Prix at Phillip Island ahead of Jorge Lorenzo and Bradley Smith.

The Doctor now leads Lorenzo by eight points, and Dani Pedrosa by 25 points in the hunt for second place, with two rounds remaining.

Jorge Lorenzo got the whole shot, but after just three laps World Champion Marc Marquez had caught and passed Lorenzo and seemed to be cruising to his twelfth victory of the season. He had pulled a gap to second place and was sat 4.1 seconds ahead of second place when he suffered an surprise fall on the brakes going into the MG corner.

Marquez’ fall gave Valentino Rossi the lead. Rossi had fought his way past Jorge Lorenzo just two laps earlier and it proved to be a race winning pass with it all falling into place for the Doctor on his 250th Premier Class title.

With the title already wrapped up, it won’t be a major disappointment for Marquez, however it will mean that Yamaha have won the last four races.

Bradley Smith claimed his first ever MotoGP podium after crashes to both Pol Espargaro and Cal Crutchlow crashed out in front of him in the final laps, with identical crashes, loosing the front going into the Honda corner.

Behind Smith, Dovizioso finished fourth and top Ducati in what will have been a frustrating race for the Italian, ending just 2.5 seconds away from the podium, but being promoted from a net seventh to fourth in the final few laps.

Hector Barbera was fifth as his return to Ducati seems to be a much happier relationship that that of his one with his Kawasaki Avintia. Alvaro Bautista pipped Scott Redding and Hiro Aoyama to top Honda honours across the line. Alex De Angelis and Nicky Hayden rounded out the top ten in Australia.