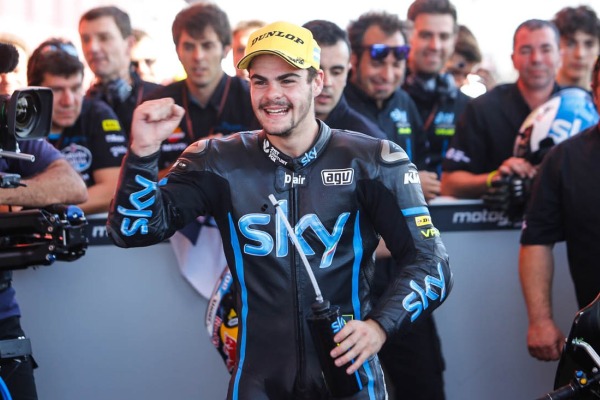 Romano Fenati was seen as the next big thing from Italy. The bright new hope. Victory in his second ever race at Jerez, was just a taste of what was to come. After two hard years on underpowered machinery, it appeared 2014 was going to be his time. On the faster KTM package, backed by Valentino Rossi it all looked good with three wins in four races at Argentina, Spain and at home in Mugello. However since then it’s all gone downhill.

One podium in the next six races, and two finishes outside the points have seen frustrations building, with them thought to have reached almost breaking point in Silverstone this past weekend. With tensions running high, rumours have emerged that Romano Fenati is ready to leave the VR46 team and join a Honda run team.

However, Vito Guareschi, the now former, team manager at the VR46 Sky team, strongly denied these rumours, insisting keeping Fenati for 2015 was of the highest priority.

“We are finalising the details,” Guareschi said to MotoGP.com. “We should know by Misano. Above all, we are very much keeping in mind that we are fighting for the championship, we are still in contention, nothing is lost and there will still be more chances, especially if Romano is able to enjoy the speed he had earlier in the year.

“I also read that in the newspapers, but the truth is that the story has just appeared completely out of the blue. Romano is a strong rider and it is normal that Honda is interested in strengthening its attack, but I have no knowledge that he has requested a different bike; on top of that, we have an agreement with KTM for the future which is all but confirmed. In fact, this week we are doing a test with some new parts.

“Actually, I don’t even want to think about. I think it is quite clear that everybody – both Sky and VR46 – want to confirm Romano for 2015. We have not even looked into other options because we hope to continue with him. Both for next year and for 2016, the market is open and everybody is always looking around. It is true that there are some very strong Italian riders around, but for us the priority is Fenati.”