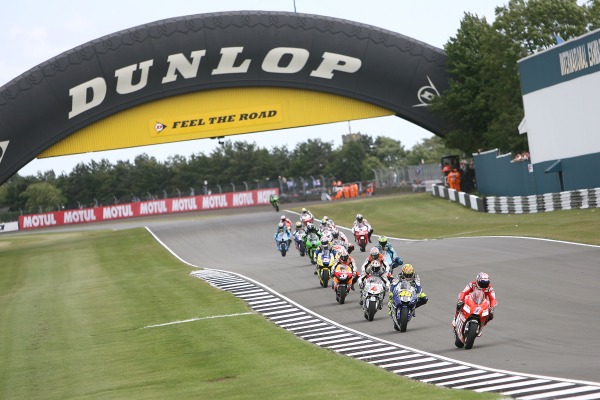 MotoGP organisers have confirmed that Donington Park will host the British MotoGP next year, for the first time in six years.

With the Circuit of Wales winning the rights to host MotoGP in Britain from 2015 on a five year deal, with an option of extending for a further five, it was clear that we would need an alternative circuit for 2015 with the Welsh track not ready. Both Silverstone and Donington Park expressed an interest in hosting the event next year, but Dorna decided that they would return to Donington Park, who last held a MotoGP race in 2009.

It will now be down to Donington to make any amendments to the circuit in order to comply with FIM standards for Grand Prix racing. Once they have met those, it will be a case of promoting and drawing as many of the 80,000 fans who attended this past weekends race at Silverstone. “After announcing the long-term MotoGP agreement between Dorna and the Circuit of Wales three weeks ago our priority has been to agree the venue for 2015,” explained Chris Herring of the Circuit of Wales. “It is in the interests of everyone, especially the fans, to make a decision as soon as possible and in Donington Park we have a venue that shares our vision for growing MotoGP in the UK.”“The Circuit of Wales has worked very quickly to secure the best deal for the British race fans and we believe Donington Park will deliver a fantastic race in 2015,” said Dorna CEO Carmelo Ezpeleta.

“Donington Park has a long history and has been the scene of some of the most exciting MotoGP races in recent years and we are sure that the extensive works undertaken since it reopened four years ago will guarantee a successful event.”

Richard Phillips the managing director of Silverstone has said he is bitterly disappointed that Silverstone was overlooked as the stand in circuit, after five years of fantastic racing in Northamptonshire.

“We have invested heavily in the circuit and facilities here at Silverstone, specifically to host MotoGP, and have developed the British Grand Prix into a highly successful event,” said Phillips. “We wanted to keep MotoGP at Silverstone, but cannot afford to subsidise it. We are extremely disappointed not to be hosting the event in 2015.

“Any future deal, with Dorna or The Circuit of Wales, had to make economic sense for all parties, including us. We know from experience what it takes to run a high quality British Grand Prix. We made what we considered to be the maximum sensible offer to retain the event at Silverstone, but it seems that The Circuit of Wales, who have no experience of running a Grand Prix, have concluded they can do better running it themselves, using Donington until their circuit is ready.

“Silverstone has taken the event to a new level over the last five years, so we hope this won’t turn out to be a backwards step for the British Grand Prix, teams and fans. The Circuit of Wales evidently believe they can make the finances work using Donington next year – we wish them the best of luck.”

Dorna haven’t released the date of next years British Grand Prix, although there are already rumours the British Grand Prix will revert back to its “usual” spot in July with no threat of clashing with Formula One.