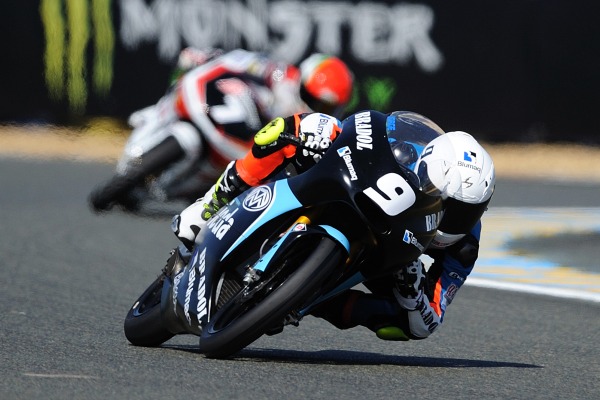 Jorge Navarro will replace Livio Loi in the Marc VDS team for the remainder for the 2014 Moto3 season.

Navarro will replace Loi who was fired by the Marc VDS team after the last round in the Sachsenring, and will take the 18-year old Spaniard on.

Navarro is currently second, behind Fabio Quatararo, in the Spanish CEV Repsol Moto3 Championship. He will continue to compete in the CEV Repsol series, on his Team Machado-Came IODA machine, but his main priorities now lie with the Kalex-KTM run Marc VDS team.

Navaroo has made three prior wild-card appearances in the past two years, although he is yet to record a point scoring finish.

“It was a difficult decision to replace Livio in our Moto3 team, but we set him clear, realistic goals at the beginning of the season and he failed to achieve them,” said Marc VDS Team Principal, Michael Bartholemy.

“As a team we could do no more to improve the results, which is why we took the difficult decision to replace Livio on the bike. “In Jorge Navarro we have a young rider who has already shown his potential with some impressive performances in the Spanish Moto3 Championship, but was unable to make the step up to the World stage due to a lack of funding. We have the budget and Jorge has shown clearly he has the pace so, for us, it was a perfect fit.

“It’s a big opportunity for any rider, and one that I’m confident that Jorge will grab with both hands.”