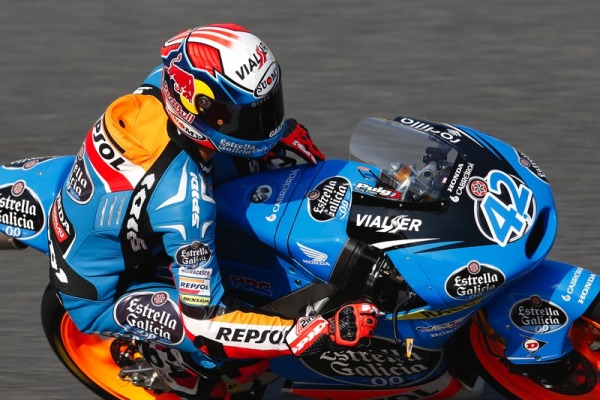 Alex Rins has yet to make a final decision about who he will move up to the Moto2 class with in the 2015 season, insisting it is too early for final decisions.

The Spaniard is currently sat in fifth place in this season’s Moto3 Championship, with four podiums already. Despite the four podiums, it has been a tough start for the 2013 Moto3 runner up, as he finds himself 35 points behind Miller in the title standings at the midway point in the season.

Rins’ Estrella Galicia 0,0 team moved from KTM to Honda, in what was seen as a surprising move with Rins just missing out on last seasons title by 12 points after a crash in the penultimate round in Japan, and after initial teething problems with the new Honda, Rins had just started to sort it and build some momentum with three podiums in a row in Jerez, Le Mans and Mugello. However a gear linkage problem in Barcelona, and a crash in Germany has seen the 18 year-old patience tested in the opening half of the 2014 season.

“I do not know what my chances are,” Rins told speedweek.com. “Jack Miller, Romano Fenati and my team-mate Alex Márquez are very, very fast and are constantly evolving. We have to see how it looks in the last race in Valencia.”

Despite the tough start to the 2014 season, the talent is evident for everybody to see, and it has not left him with a shortage of potential suitors, should he decide that he wants to move to Moto2 at the end of the season. Recent weeks have seen Marc VDS, Páginas Amarillas HP 40 Pons, Aspar Suter and Italtrans all linked with the Catalan with potential openings in all of their teams. For the time being though, Rins isn’t focused on who he will be riding for next season.

“It’s a bit early for a final decision,” he said. “But I would like to move up to the Moto2 class, because I think that makes it even more fun with a more powerful bike.”

Both Rins and his team-mate Alex Marquez are expected to move up from Moto3 to Moto2 next season, with their seats being taken by current Estrella Galicia 0,0 Repsol CEV duo Maria Herrera and Fabio Quartararo, even if the latter has to miss the opening rounds due to the current age restrictions.