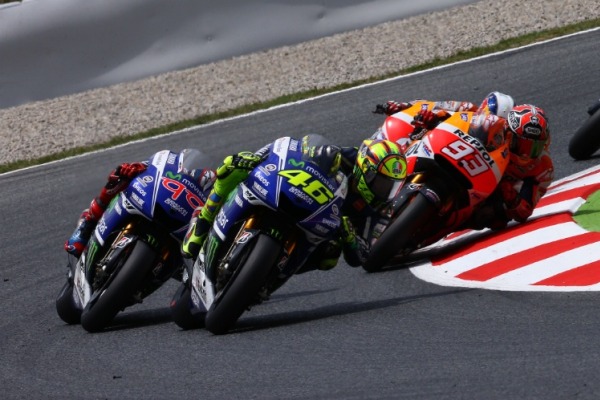 Marc Marquez won a stunning Catalan Grand Prix, which ran right down to the final corner, finishing ahead of Valentino Rossi and Dani Pedrosa in a Grand Prix that will go down as one of the best of recent times.

Marquez’ victory was Honda’s 100th MotoGP victory, and with younger brother Alex’s victory in Moto3, it was also the first time in Grand Prix racing that siblings have won on the same day for a truly historic day for Honda and the Marquez family.

The eventual victory margin was just over half of a second, but it could’ve been even closer than that, with Marquez fending off a rampaging Pedrosa in the final corners, resulting in Pedrosa clipping Marquez and running wide, allowing Rossi to split the Repsol Honda’s.

Marquez didn’t have it all his own way, as he started from third on the grid, the first time this year he’s not started from pole, and Jorge Lorenzo led the race early, before Valentino Rossi took over from his teammate to lead the majority of the race. It was then a case of staying ahead of the Repsol Honda riders as long as possible. When the Repsol Honda riders did manage to get ahead of Rossi, a yellow flag forced both of them to concede back the position back. But once they were ahead for the second time, it was only the near miss right at the end from the rejuvenated Pedrosa that allowed Rossi back in.

“I am delighted with this win because this is a track which I have always found difficult,” said Marquez who made it seven from seven after the race. “You could see how tough it is for me this weekend: I missed out on pole for the first time this season and had my first crash of the year.

“The race was very hard with a battle against Dani, Jorge and Valentino. I think that the last few corners were especially spectacular, with the moves by Valentino and Dani. I am very happy about taking another 25 points and also to win on the same day as my brother at home in front of all our fans!

Jorge Lorenzo led the race early, but he couldn’t stay with the front three, and was always just too far away from the front three to make a serious impact at the front of the race, finishing the race just under three seconds behind third placed Pedrosa.

Stefan Bradl started the race well, before eventually being dropped by the factory boys, leaving him to finish in a lonely fifth place. Aleix Espargaro finished sixth and just under two seconds ahead of younger brother Pol who was on the full prototype M1.

Andrea Dovizioso was the first Ducati, and he was eighth, just ahead of Andrea Iannone who had another impressive outing, and Bradley Smith rounded out the top ten, in what was a disappointing race day for the young Brit.