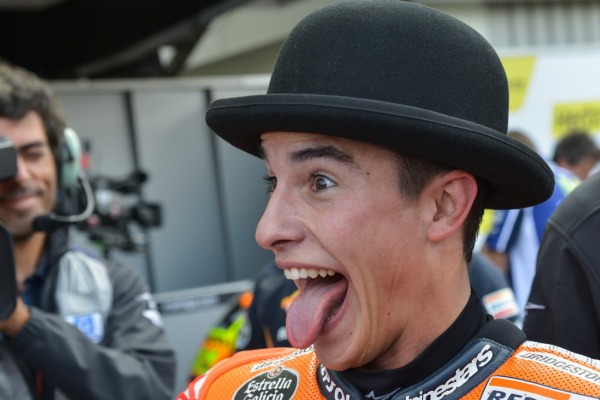 MotoGP World Champion Marc Marquez had to fight tooth and nail to overcome a rampant Jorge Lorenzo to claim his eleventh victory of the season. The Spanish duo were joined on the podium by Valentino Rossi on the day the Doctor set the record for most Grand Prix.

It was Jorge Lorenzo who got the whole shot away from the line, and he looked to break Marquez early, with five riders all making a break from the start. Lorenzo led for the opening ten laps, and only Marquez managed to stay with the two time MotoGP world champion. Behind them Valentino Rossi, who was starting his record breaking 246th premier class Grand Prix, was battling with Andrea Dovizioso who’s Ducati seemed to be enjoying the cooler conditions, and Dani Pedrosa, victor last time out in Brno.

The pair battled, with Marquez taking the lead nine laps before the end after Lorenzo ran wide in Stowe, only for Marquez to replicate the mistake three laps later. The duo battled until the penultimate lap, where Marquez regained the lead, after a firm pass on the Mallorcan in the loop, but once he was ahead, he could hold his lead, and eventually cross the line 0.732s ahead of Lorenzo.

The win means Marquez is the first rider since Valentino Rossi in 2005 to win 11 MotoGP races in a single season, and it doesn’t look like he is done yet.

“Honestly today I didn’t expect Jorge to be like that! He was so strong from the beginning,” Marquez said after his 17th win in MotoGP. “The pace was very high, I did the same rhythm as in FP4. He was pushing a lot at the start and I was trying to save the tyres a little.

“In the second half of the race my pace was slightly better and I tried to overtake him but made a mistake. I start to think about last year and I said ‘ok we’ll make a small gap.’ It was very tough on the last few laps. Luckily it was enough. A great battle and great to return to victory.”

Behind the top two, the race long battle for third position saw Valentino Rossi pip forth place Dani Pedrosa by 0.175 and fifth placed Andrea Dovizioso by 0.544 in a thrilling race for the podium.

Pol Espargaro was the best of the rest, has he claimed sixth position, ahead of Stefan Bradl, Andrea Iannone and his older brother Aleix Espargaro. Scott Redding rounded out the top ten, as he continued his wonderful weekend which has only furthered the calls for the Brit to find himself on a RC213V factory machine next season.