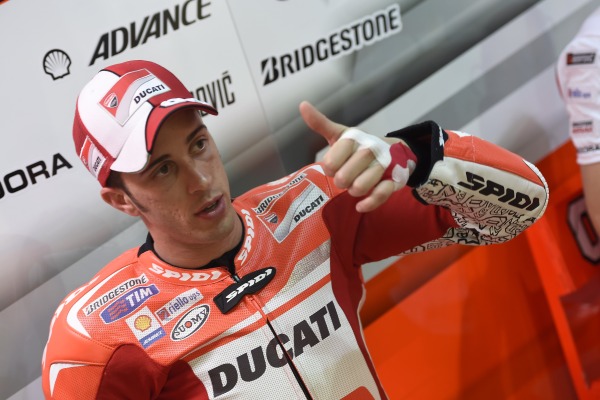 Dovizioso would be on his fourth different manufacture MotoGP bike if he makes the switch.

Andrea Dovizioso may be set to clinch one of the new Suzuki rides for 2015.

Dovizioso, who is currently riding for the Factory Ducati team – which is of course an Open bike – and talks between the Italian and the new Suzuki team are well underway with the former 125cc World Champions contract with the Bologna brand up at the end of the season.

Suzuki currently have Randy De Puniet testing the new bike, and Dovizioso’s experience aboard the factory Honda, Ducati and satellite Yamaha could be valuable in helping develop the new bike.

Despite Dovizioso’s first podium on the Ducati in Austin last month, the progression hasn’t been as fast as Dovi had hoped for, and this could prompt the Italian to look elsewhere for his ride once his contract is up.

Dovizioso’s manager Simone Battistella confirmed to Motorcycle News that he and Suzuki management had been in discussions over a potential ride in 2015.

Despite confirming talks had taken place, Battistella did say that no offer had been made or accepted, he and Dovizioso were meerly exploring the option.

“We have been talking to understand their approach and what they are doing but that is something you do with everybody.” he said. “I think Suzuki has to understand which riders it wants to target. From our side nothing has happened with Suzuki or anybody else, not even with Ducati.

He did however say that the Suzuki ride is an appealing on to Dovizioso, expecting them to be fighting for podiums next season.

“The Suzuki has always been a very strong option. If we see where they were when they stopped, they had some very strong results and I think the bike could have been on the podium. At the time Alvaro (Bautista) was very young and I think with one of the top riders they would have been on the podium a few times. I think with good riders, Suzuki will be very close to the podium right from the beginning next year.”

Whilst Dovizioso isn’t ready to consider his time on the Ducati a total failure, Battistella did say that time is running out for Ducati and Gigi Dall’Igna to prove that the open project is moving the bike in the right direction to help his client achieve his personal goals.

“I think it is not going to be a technical situation that is going to convince him to stay. I think it will be a confidence situation between Gigi and Andrea because the time is not there to show him something with the bike. The start of the relationship has been very good but I don’t think there is enough time to see something on track that will work that will make him want to stay.”