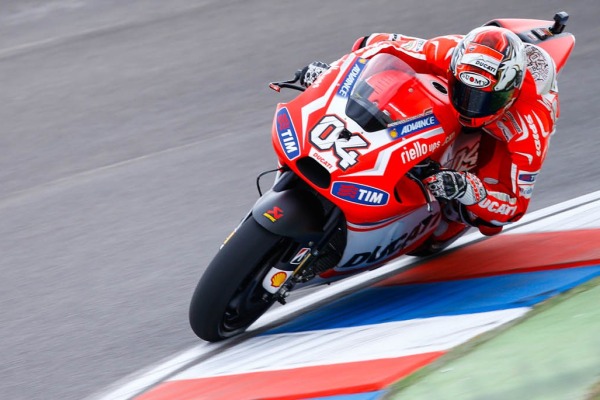 With Aleix Espargaro and Maverick Viñales confirmed as Suzuki’s riders for their highly anticipated return to MotoGP, one of their targets, Andrea Dovizioso has spoken out about his negations with Suzuki.

Dovizoso’s contract with the factory Ducati team was up for renewal at the end of the current season, and before he signed a new two year deal with the Bologna brand, he held extensive talks with Suzuki, seriously considering the offer put on the table from the Japanese company.

Suzuki’s new inline four-cylinder 1000-cc bike’s potential is largely unknown with only a few test results at the hands of Randy De Puniet released. Despite gradual improvements to this season’s Desmosedici, Ducati are still searching for their first win since Casey Stoner last won on it four years ago.

Whilst Dovizioso seriously considered the offer Suzuki made him, the promise of a totally revamped Desmosedici and a further two years was enough to convince him to stick with Ducati.

“I was close to Suzuki because I like the situation with them and they pushed a lot to take me,” Dovi told MCN. “They offered me a lot because they believe in me and they know I have good experience with development having raced a lot of different bikes. It was a good feeling to move to them but I decided to stay with Ducati.”

He also said he would perceive it a backward step, with all the development work he has done over the past two seasons going to waste, and having to start it all again, but with Suzuki.

“I would have started from zero and simply discarded the years that I’ve already invested in Ducati.”