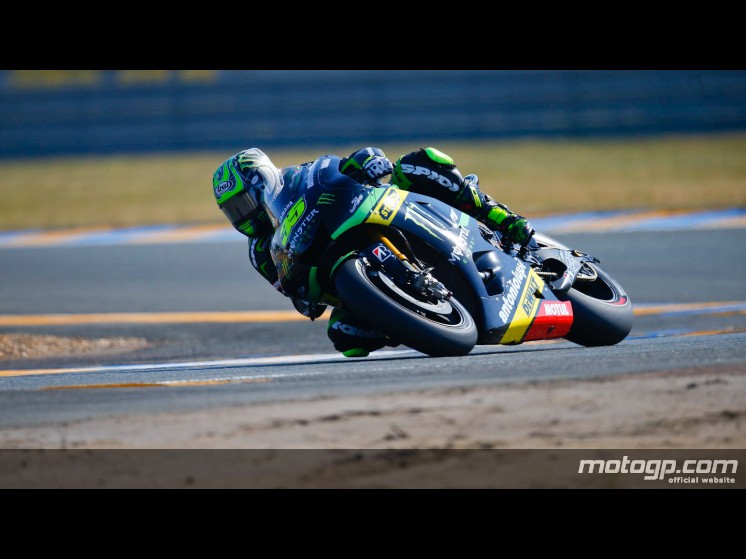 Cal Crutchlow was arguably star of the day in Le Mans as the battered and bruised Brit finished second place at the French Grand Prix at the Bugatti circuit.

The Coventry born rider fell on Saturday morning, breaking his tibia by the knee, as well as still recovering from heavy falls in Jerez.

Immediately after the crash, Cal had a severe nosebleed and coughed up blood with internal bleeding, yet it wasn’t enough to dampen Crutchlow’s day.

After demonstrating some of that British bulldog spirit to claim second, and maybe more impressively top Yamaha, Cal said: “I’m really happy to get my best ever result in MotoGP and the whole team did an incredible job and deserves this result. We showed our fast pace in the dry, we showed our pace in the wet and I think everybody is aware we are not here through luck.

“It’s even better and more important because this is the home race for Tech 3 and Monster Energy sponsors the event. So to be the best and only Yamaha on the podium feels really good.

“My start was not the best and it took me a bit of time to get temperature into the tyres. But once I managed that I felt really comfortable. When I saw Andrea and Dani opening a small gap to Valentino I had to make a move because I was afraid they would be too far ahead to try and catch later in the race. And when I saw Marquez recovering time on my pit board I had to pass Andrea otherwise he might have caught both of us during the last laps.

“I’m really happy with how things went, especially after the crash yesterday. The wet track obviously put less stress on my body but it was tough riding injured in such tough conditions.

From now on I just hope we can be injury free and go to Mugello to put on the same show as we did here today.”

It will  be tough for Crutchlow to emulate his achievements in Mugello, but this year the Brit is showing what he really is capable of on two wheels.

“I had a big crash yesterday and I think it was going to be a difficult race if it was dry; I had confidence I would be there in the top five but maybe the podium would have been difficult. I was remembering what happened here last year, when I crashed out, and it was the same guys again; me, Dovi (Dovizioso) and Vale (Valentino Rossi) were all together again at one point, so I knew I needed to make amends from last year and we finally got the podium. Marc (Marquez) was coming at the end and I was a little scared [laughs] and had to keep pushing on.”